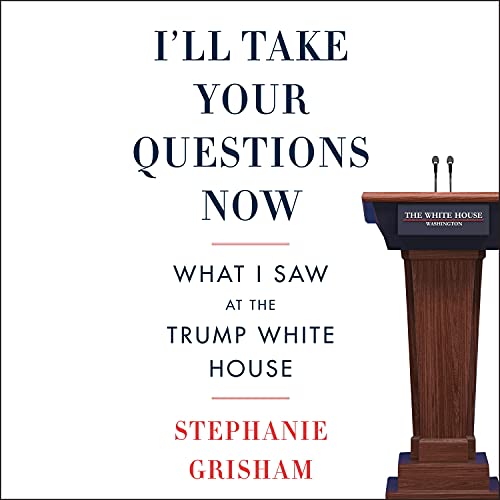 The most candid and intimate portrait of the Trump White House to date.
Stephanie Grisham rose from being a junior press wrangler on the Trump campaign in 2016 to become the White House press secretary and communications director, while also serving as First Lady Melania Trump’s communications director and eventually chief of staff. Few members of Trump’s inner circle served longer or were as close to the first family as Stephanie Grisham, and few had her unique insight into the administration’s turbulent four years, particularly the personalities behind the headlines.

You are not employing semaphore flags.

No, what you’re saying is clear and concise, spoken in simple language, enunciated, and not hurried. You’re not mumbling; you’re communicating as clearly as possible, but as Stephanie Grisham points out in her new book «I’ll Take Your Questions Now» it’s still possible that the message is misunderstood.

Most Americans have probably formed an opinion about what it would have been like to work in the Trump White House. In this section of her memoir, Grisham recounts her six years with the family and shares her thoughts, the first of which was that serving in the White House was an honor and the fulfillment of a dream.
She’d started at the bottom and worked her way up to press secretary, Mrs. Trump’s communications director, West Wing communications director, Mrs. Trump’s Chief of Staff, and Trump transition team member. She particularly enjoyed her time on the first lady’s team, and she claims she felt she was as close to Melania Trump as any other staffer. She frequently refers to Mrs. Trump as «my girl.» which appears to be irreverent.

Surprisingly, this does not feel disrespectful. It has a lighthearted tone and a bit of fun-poking, as does much of Grisham’s story – and yet, readers may get the sense that Grisham wants to kid, at least at first, to soften what becomes growing frustration, absolute fear of the President’s «horrible» temper, and plain old exhaustion at a White House that didn’t follow the conventional rules she hoped to find.

To be sure, readers will encounter some contradiction and dissonance as Grisham praises something in one place and condemns it in another. The plot can change in an instant. She states flatly that this «is not a book… where you need to like me» but chances are you will because there’s an unexpected and appealing sense of balance here; watching her love for the job wane from relishing to rancor and back is also endearing for its candor. This book also includes accounts of admiration gone flat, irritations with «chaos» (a word that appears frequently), infighting and a «catfight,» sarcasm, and wit.

The big surprise about «I’ll Take Your Questions Now» is that there are still surprises about the Trump administration to tell. Stephanie Grisham shares them in a chatty, casual, just-friends style as if you’re standing in a tavern somewhere together, office gossiping. However, jaded readers may notice that the familiarity is engineered, given the spin-nature of Grisham’s former job and the genuine and faux-flippancy in much of the rest of the story.

Grisham claims in the book that this «book is not meant to be political» but this is deceptive. It is inherently so by virtue of its subject, and if you’ve enjoyed one, two, or ten books similar to it, «I’ll Take Your Questions Now» is the one to highlight.