He Who Fights with Monsters Audiobook

He Who Fights with Monsters Audiobook 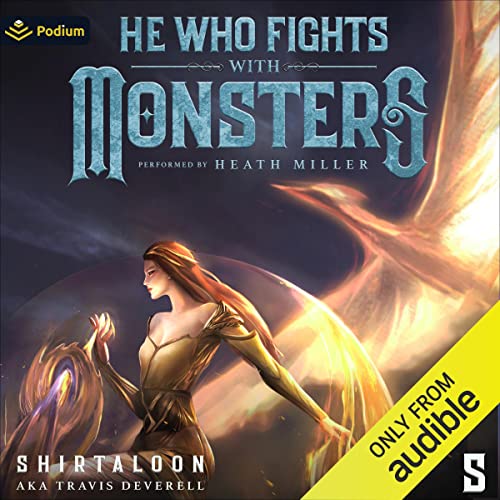 Jason has discovered that his homeworld isn’t exactly what he expected. Furthermore, the rest of the world is on the verge of hearing about his revelation.
With magic on the rise and forces pulling him in multiple directions, Jason faces greater challenges than ever before.
Even as his power grows to new and incredible heights, he realizes that doing his absolute best is insufficient.

The following is some background on the series: Witness an isekai culture clash as a laid-back Australian finds himself in a very serious world. You’ll see him again with suspiciously evil abilities thanks to a unique progression system that combines cultivation and traditional LitRPG elements. Adventurers, gods, and magic enjoy a weak-to-strong story with the main character who earns his power without overshadowing everyone around him, with plenty of loot. The rich characters and world-building provide humor, political intrigue, and slice-of-life elements, in addition to plenty of monster fighting and adventure.

The Chinese village had been leveled by a powerful earthquake and the villagers watched as an alien figure used beams of energy to cut through the girder blocking the hole in which a child was trapped. The strange being was inhuman in nature. A dark floating cloak containing not a person, but energy that looked much like the helix nebula, the eye of god floating around. The cloak was eye-like orbs, which fired the beams that sliced through steel like it was soft cheese at first, the villagers had been afraid of Jason Asano and his terrifying companion, but as the pair rescued person after person from the rubble, they went from wary to welcoming The beams of Jason’s familiar Gordon made short work of the collapsed girder, revealing the narrow hole underneath Jason could easily see through the darkness, to the top of the little boy’s head and extended his shadow arms to pluck him out of the hole as soon as the Boy was free, his mother rushed to embrace him as the villagers looked on in the midst of the relief efforts, they were all as dirty and caked with dust, as Jason was under his cloak in her office back in Australia, Sydney network branch committee, woman, Annabeth Tilden, Was watching the latest video file delivered by the Sydney network branch’s new director of operations ketevan? It was news footage intercepted before ever going into public distribution.

It had been sent by the Beijing network branch, along with an angrily worded message, took responders several hours to reach more isolated areas in the wake of the catastrophic earthquake, the collapse of the bridge, you see behind me, devastated this small village, but the villagers themselves attribute The low number of casualties to a number of mysterious individuals, several of which they describe as appearing supernatural in nature. This is not the first anna closed the video file with a sigh and added it to a folder with the others. One of the more disturbing elements was that the reporter had been speaking not in mandarin but in English, not only was Jason being far too prominent in his actions, but clearly, someone wanted to publicize them in the west. None of the videos had made it to broadcast, but several had been appearing. Online Jason may be playing rather loosely with the secrecy provisions of our agreement after our people attacked him in Hanoi ketevan said, but at least he hasn’t been showing off the stars in his cloak.

Since then, no one has connected the stories to the starlight rider. Yet anna said, and they weren’t our people in Hanoi. How many times have we had to explain that the people who went after him were network, but not our network ketevan asked I’m not so sure. He’Ll still see us as an ally once he’s done with his journey of self-discovery or whatever it is he’s off doing I swear. I want to fire a missile at the Hanoi branch.

The international committee more or less did catalog reminded her a month earlier in Hanoi, that Jason had underpriced the yacht in order to sell it off quickly. He started his trip by playing tourist but quickly sensed the people following him. The capture team had two category threes and a dozen category twos. They realized that Asano had clearly sensed them and had been forced to shed slower members as they pursued their elusive target through the city. They finally tracked him down in the hong river slum town.

A bizarre hodgepodge of urban industrial and rural illegal dwellings was bunched in with small farm plots stores and even factories, dirt roads and irrigation ditches defined the thoroughfares with everything from the buildings to the very ground, marking poverty, pollution, and dilapidation. It was a backwater. Oddly, located in a city of seven and a half million without street lights, it was a dark and dangerous place at night, more for the environment than the residents for the capture team, though darkness was not an issue only one of the categories threes tan had managed To maintain the chase all the way, courtesy of speed powers granted by his light essence, the same light essence was able to illuminate the area with his aura. Tan’S aura didn’t simply radiate light over a wide area. All darkness was banished, it seemed to have no source and was simply everywhere filling every nook and cranny with soft illumination.

When the space lit up Jason was revealed to be standing right in front of the capture team, the only remaining patch of darkness was inside the hood of his cloak, in which only a pair of silver eyes could be seen. The Chinese village had been leveled by a powerful earthquake and the villagers watched as an alien figure used beams of energy to cut through the girder blocking the hole in which a child was trapped. The strange being was inhuman in nature, a dark floating cloak containing not a person, but energy that looked much like the helix nebula, the eye of god floating around. The cloak was eye-like orbs, which fired the beams that sliced through.