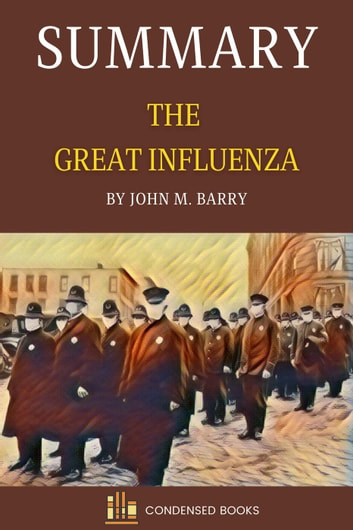 A chapter by chapter high-quality summary of John M. Barry´s book The Great Influenza, including chapter details and analysis of the main themes of the original book.

About the original The Great Influenza book:

The world’s most destructive influenza virus emerged in an army camp in Kansas during World War I, went east with American troops, and then burst, killing up to 100 million people worldwide. It killed more people in a year than the Black Death did in a century, killing more people in twenty-four months than AIDS killed in twenty-four years. However, this was not the Middle Ages, and 1918 was the first time science and pandemic sickness collided.
«The Great Influenza» offers us a precise and frightening model as we confront the epidemics lurking on our own horizon, and it is magisterial in its breadth of view and depth of scholarship. As Barry puts it, «The last lesson of 1918, which is both easy and difficult to put into practice, is that people in positions of power must maintain the public’s faith. That can be accomplished by distorting nothing, putting the best face on nothing, and attempting to influence no one. That was the first and finest thing Lincoln said. Whatever evil exists, a leader must make it concrete. Only then would it be possible to dismantle it.»

The Great Influenza Summary is written by Peter Cuomo.