The Pillars of the Earth Summary

The Pillars of the Earth Summary 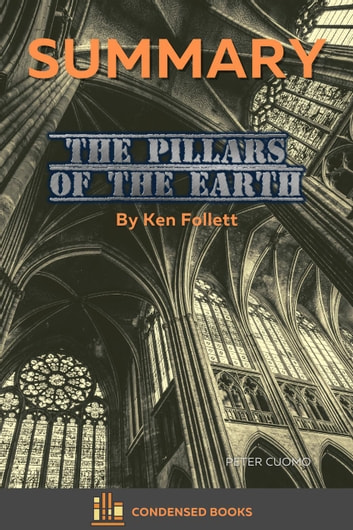 A high-quality summary of Ken Follett´s book The Pillars of the Earth, including chapter details and analysis of the main themes of the original book.

About the original The Pillars of the Earth book:

The sinking of the White Ship in 1120 kicks off Welsh author Ken Follett’s novel The Pillars of the Earth, which ends with the death of Thomas Beckett in 1170.

Henry I’s only male heir died in the sinking of the White Ship in the English Channel. From 1135 to 1153, England slid into a period known as the Anarchy, during which Henry’s female successor Matilda (referred to as Maud in Follett’s book and this summary) and his nephew Stephen fought over succession.

Henry II, Maud’s son, rose to the throne in 1154. Henry II’s rivalry with Thomas Beckett over ecclesiastical vs monarchical leadership of the English church eventually led to Henry II attacking and killing Beckett in Canterbury Cathedral in 1170, causing shock throughout Christendom and resulting in Beckett’s crucifixion.

Even though these real-life characters appear in Follett’s bestselling work of historical fiction, the book focuses on regular people’s lives. It is set in the imaginary town of Kingsbridge, and it tells the story of Prior Philip’s efforts to establish a church that reflects his temperament and values. This synopsis applies to the Penguin mass market paperback edition of the book, which was first released in 1990.

The Pillars of the Earth Summary book is written by Condensed Books.

The Pillars of the Earth Plot

A traveling minstrel named Jack Shareburg survives the sinking of the White Ship in 1120 and arrives in the little settlement of Kingsbridge. He meets and impregnates Ellen there. Jack is aware that the ship was deliberately damaged, which is inconvenient for the local power brokers.

Jack is hanged in 1125 after being falsely accused of stealing a costly bowl by two members of the local church, Walerian Bigod and Prior James, and a local named Percy Hamleigh. Ellen curses the three men and flees into the woods to raise her son, who is also called Jack. Ellen meets and helps Tom Builder and his children, Alfred and Martha, a decade later, in 1135. Tom is heartbroken after his wife Agnes dies in delivery, leaving him with little choice except to abandon the baby.

Prior Philip at the adjacent Kingsbridge priory has adopted the youngster, Jonathan, according to Ellen. Tom and Ellen fall in love and marry, bringing their families together.

Prior Philip, an orphan himself, was just elected to lead the Kingsbridge priory with the support of Walerian Bigod after Prior James died. Walerian rises the ranks to become a bishop. Tom Builder’s impoverished family soon arrives in Kingsbridge in search of jobs.

The priory is in bad shape, but it agrees to hire Tom for temporary work on the church’s deteriorating structure. That night, Ellen’s precocious son Jack sets fire to the church, and Tom is promoted to master builder the next morning, in charge of the reconstruction.

William Hamleigh, Percy Hamleigh’s son, takes over the earldom of Shiring, which is close by. He operates under the protection of «King Stephen,» Henry’s nephew, against Bartholemew, the Earl of Shiring, who has declared support for Maud’s claim to the throne.

Bartholemew is imprisoned as a pauper, and his children, Aliena and Richard, are taken from him. He has them swear an oath to reclaim the earldom one day. Meanwhile, Aliena launches a wool-selling business to help Richard pay for his knight training. Amid the political chaos, Philip negotiates the rights to part of the Shiring lands on his own to help fund his new church. Both Walerian and the Hamleighs are enraged by his independence.

Under Philip’s leadership, the church expands by leaps and bounds, and Kingsbridge transforms from a little village to a bustling market town. Taking advantage of the lawlessness of the civil war, William attacks Kingsbridge and burns down its market. Tom passes away in the process, and his less skilled son Alfred takes over. Meanwhile, William battles on Stephen’s side in the Battle of Lincoln for succession, which Stephen loses.

Maud is victorious, and William quickly switches sides. Meanwhile, Aliena is once again penniless, having lost her wool stash in the Kingsbridge attack. Despite her feelings for Jack, she chooses to marry the dimwitted Alfred in order to other’s knighthood. As a result, the family has torn apart, and Jack decides to leave Kingsbridge.

Alfred, who is uneasy, is unable to complete their marriage, and his bad construction causes part of the priory to collapse. Aliena searches for Jack after he left. Years later, both return with wealth and fresh building plans. Jack has been promoted to master builder. With time, William’s influence expands, and Kingsbridge prospers.

The arrival of Henry II brings generally good fortune to Kingsbridge. The church is finally finished. The Shiring earldom is inherited by Aliena and Jack’s son. William is relegated to the position of sheriff of Shiring, where he continues to sow havoc.

With Thomas Beckett’s help, Philip succeeds Walerian as bishop, and Jonathan becomes the new prior. When Beckett is killed, William is sentenced to death. Philip is one of those who openly participate in Henry II’s atonement as a result of the backlash.