Summary of The Paris Library by Janet Skeslien Charles 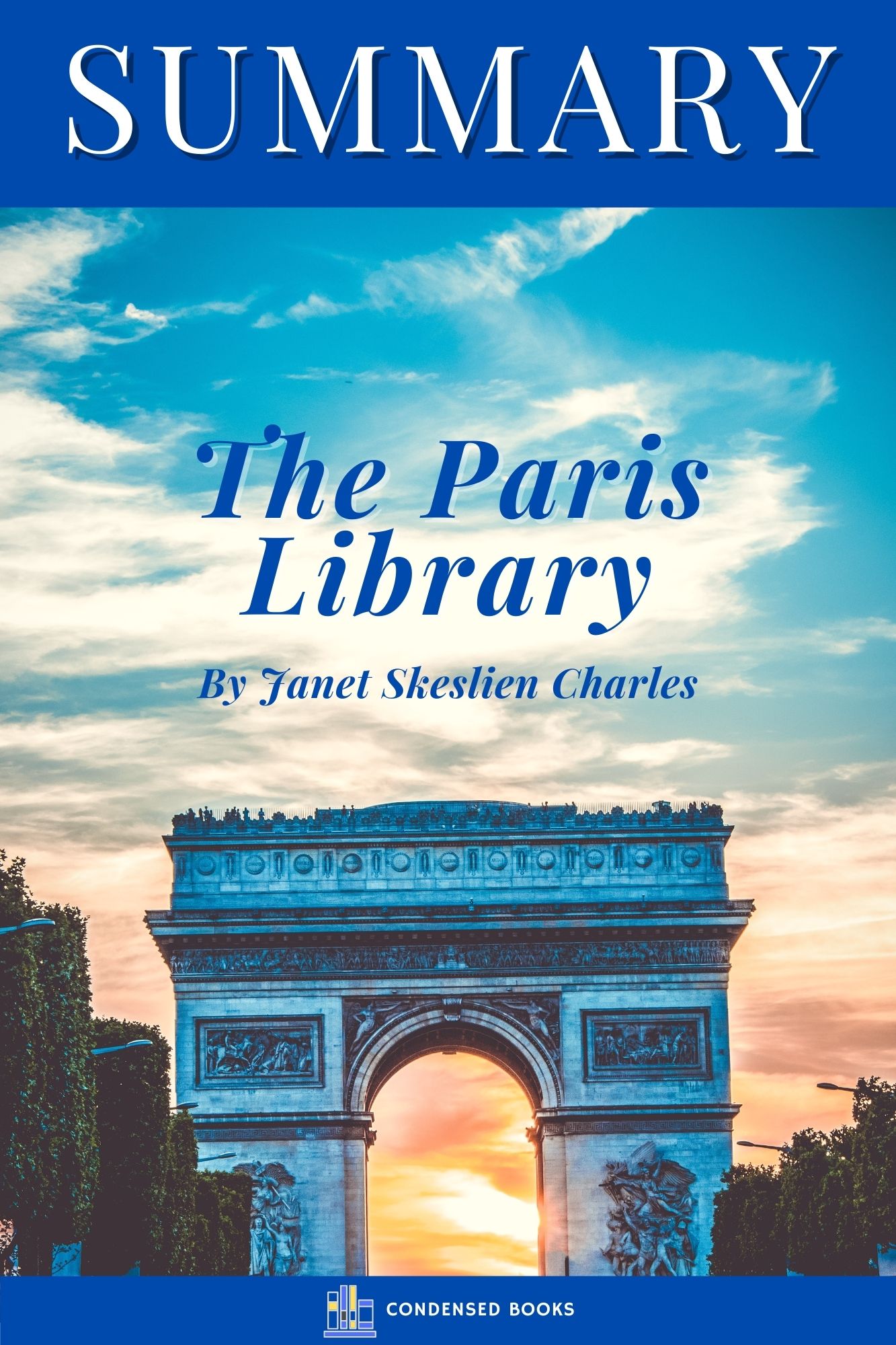 Extensive analysis of Janet Skeslien Charles´s book The Paris Library, including detailed summaries of the chapters of the original book.

About The Paris Library book

Odile is a strong-willed young woman. Odile is adamant about not relying on men for financial security, influenced by her mother’s disapproval of her beloved Aunt Caro, who divorced for good reason. Odile seeks and secures a job at the American Library in Paris in the months leading up to World War II, owing to her love of books and fascination with the Dewey Decimal System.

Odile’s conservative parents, particularly her father, would prefer that she marry rather than work. Her twin brother, Rémy, with whom she is close, and Paul, her new suitor, are, on the other hand, both supportive. Odile enjoys her job at the Library, where she feels at home among like-minded people.

It’s a community of intellectuals and English speakers looking for a place to call home in Paris. Margaret, an English woman in a loveless marriage, finds a home at the Library and befriends Odile. Odile looks up to strong and kind women like Professor Cohen of the Sorbonne and Library Director Miss Reeder.

Few people in Paris are aware that war is looming. Rémy is one of them, and he joins the French army, much to his family’s dismay. Odile at first blames Bitsi, Rémy’s love, and her friend, for his decision, but the friendship is later repaired. Professor Cohen, a devout Jew, is another who foresees war. When the war breaks out, the Nazis are quickly on their way to Paris. Rémy is wounded in the early fighting and is later imprisoned in a POW camp, where he dies.

Miss Reeder, an American, vows to stay in Paris to direct the Library but is forced to leave when the United States joins the war. Dr. Fuchs, the Nazi book inspector who was initially feared, turns out to be a supporter of the Library. He does not, however, allow Jewish subscribers to join. In defiance of the edict, Library employees deliver books to Jewish subscribers’ homes.

Professor Cohen receives books from Odile personally. By emphasizing the role of books in transporting people from their situations and engaging their empathy and minds, Charles emphasizes the importance of this resistance. In the difficult conditions of occupied Paris, where food is becoming increasingly scarce and the arrest of Jewish citizens and «enemy aliens» is a constant threat, this role is especially important.

The Paris Library is love, friendship, and betrayal story about Odile’s growing feelings for Paul, a low-ranking police officer. Professor Cohen is informed by a scold at the Library that Paul is the one who arrests her. Odile’s father, a police captain, is tasked with looking into the tens of thousands of tips received from informants. Odile sees these crow letters when she goes to his office to ask for help finding Professor Cohen.

They’re named after the «black-hearted» people who spy on their neighbors. Her father is adamant about not assisting the Professor. Odile goes back to her father’s office two more times to steal some of these letters and save a few people. Odile’s father, who has caught her a second time, warns her that if she returns, he will be executed for failing to investigate tips. Both Odile’s father and Paul are collaborating with the Nazis. Paul has outbursts of rage directed primarily at French women consorting with German soldiers, as he grows increasingly enraged at his subordinate role to the Nazis and his humiliating tasks. Odile is alarmed by his rage, despite her undying love for him.

Margaret is detained as an «enemy alien,» but she is released by a sympathetic German, who later becomes her lover. Margaret obtains food and other items with his assistance, which she shares with Odile. Margaret eventually tells Odile about her German lover’s secret. Odile is enraged at first, but she recognizes Margaret’s predicament.

Odile wants Margaret to be her matron of honor when she marries Paul, whom she has accepted. Odile, on the other hand, is envious of Margaret’s wealth and resents her criticisms of the French army. Odile reveals Margaret’s secret to Paul in a fit of rage but quickly regrets it. When Paris is freed, Paul and another officer come across Margaret on the street.

Paul beats Margaret and cuts her hair off in a fit of rage, branding her a harlot. Margaret’s husband abandons her and takes their daughter as a result. Odile, who recently eloped with Paul at his urgent request, has no idea what happened and is concerned when Margaret fails to show up at a Library party for her and Paul. Margaret is horrified when Odile visits her. Margaret holds her responsible for spilling the secret and vows to never see her again.

Margaret gives Odile a belt and tells her to remember the meaning of friendship when she wears it. Odile returns to the American Hospital after wandering the streets of Paris, where she previously volunteered, and now does so again. She meets an American soldier there, agrees to marry him, and then abandons Paris, never to see her family or friends again.

Lily befriends Odile, who lives alone and is lonely, nearly 40 years later. Odile’s husband and son have both passed away. Odile is on the verge of committing suicide when Lily knocks on her door for the first time. Odile, on the other hand, agrees to an interview for Lily’s project about France. Lily reminds Odile of her younger self, being intellectually curious and socially awkward at times. When Lily’s mother dies, the two form an even stronger bond. Lily’s father remarries soon after. Odile helps Lily accept her overprotective father and her stepmother, who is struggling with two baby boys, by drawing on her own life experiences. Odile also inspires Lily to speak up for herself and pursue her ambition of attending college.

More importantly, Odile saves Lily from ruining a good friendship with a classmate, Mary Louise, by intervening in a jealous rage. Lily was on the verge of telling Mary Louise’s boyfriend about an affair that Mary Louise had, just as Odile did so many years ago when she revealed Margaret’s secret. Odile wears Margaret’s parting gift, the belt, until Lily’s high school graduation, carrying the guilt of betraying Margaret.

Lily assists Odile in overcoming her guilt and regaining a sense of community. Lily looks through Odile’s personal effects, curious about her past, and when she finds a crow letter (which Odile stole), she incorrectly accuses her of being an informant. Odile is enraged and briefly excludes Lily from her life, but she eventually forgives her.

Despite her knowledge of Lily’s flaws, Odile loves and accepts her unconditionally. Odile gives Lily a plane ticket to Paris for her high school graduation. Lily has become a Francophile after learning the French language from Odile and has decided to visit the American Library when she arrives.