The Mothers and Daughters of the Bible Speak Audiobook

The Mothers and Daughters of the Bible Speak Audiobook 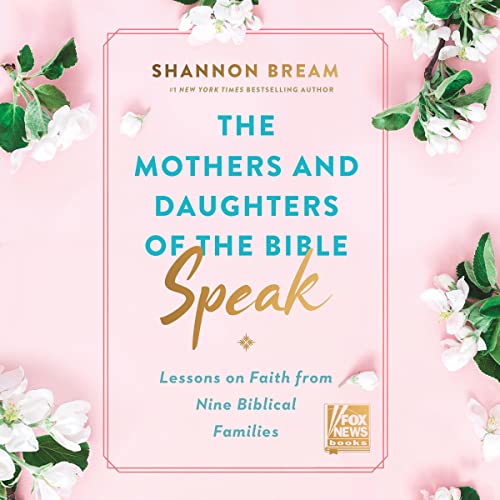 Faith Lessons from Nine Biblical Families God always follows through on His promises, but not always in the way we expect…
The phrase «have faith.» is frequently heard. But how does it feel to put it into practice? In The Mothers and Daughters of the Bible Speak, Shannon Bream looks at the lives of biblical women to see how God’s plans can turn our lives upside down. She tells the story of Jochebed, a mother who went to great lengths to protect her son, Moses, from Pharaoh. Could Jochebed have predicted that exile and danger were part of God’s original plan for her son? Regardless, it was all part of God’s master plan to deliver Israel from slavery. Another biblical mother, Rebekah, made terrible choices to ensure her son’s place in history. Michal, a daughter, struggled with pride while attempting to keep her faithless father, Saul, from committing sin.
Shannon explains how God’s unexpected agenda can change the way we think about family in these stories, and how faith and family are inextricably linked. Not all of the Bible’s mothers and daughters were flawless role models. They were human beings like us, striving to achieve their goals. Some heard God’s voice, while others chose their own paths. Through the lens of their flaws, we can see how God used their stories to bring about His divine plans. He is still doing the same work in our lives today.

Faith is often a winding path rather than a straight line, as the Bible’s Mothers and Daughters Speak demonstrates. However, as the stories of biblical families show, the journeys end in greater peace and joy than we could ever imagine.

Bags were indeed on that incoming flight in the first bit of good news that day they showed up and pedaled to the metal. I started putting on my face in the car when we arrived at the church, the pastor and his wife could not have been kinder. They’Ve have been praying for us all day through the many, unplanned irritations and detours. As I made peace with the slicked-back, ponytail I’d be sporting. I threw on that wrinkle-defying dress and we said a quick prayer before I spoke that night three women took to the stage and shared deeply personal stories of loss and how God had redeemed their enormous suffering for his glory with each bit of vulnerability and pain.

They revealed I felt a dagger going through my own heart. I had spent the day angry with everyone, and everything insulted that my plans were being thwarted at every turn. I demanded to know why God would drag me through these circumstances when I was exhausted and trying to show up to make him look good, oh, and by the way. Why wasn’t he going to? Let me look good.

For this event, a glam session, courtesy of Walgreens, was not what I had in mind. I mean if I didn’t look good. How was I supposed to make him look good ouch? I sat in that pew watching the day flash before my eyes. Finally, getting to the point this day wasn’t about my getting up on that stage: unflustered and polished.

It was about realizing that it had the wrong focus all day long. This event was about walking through life with women who had suffered loss or were in the midst of it. At that very moment, why did I think that showing up looking as though I had not a care in the world was the right way to share god’s grace and promises? I was in tears by the time the pastor’s wife introduced me and told the women I’d had such a rough day all day. All those annoying disappointments were actually the whole point.

The lord took me on that roller coaster so that my heart would be much more attuned to what he wanted to say to me. It wasn’t about me, it was about him and the women he deeply loved. It was about being humbly vulnerable, genuine, and transparent. So much of what we read in the scriptures magnifies the same lesson over and over again, the journey is part of the process. What looks like a delay in getting to the good stuff is an inescapable necessary leg of the trip, even Jesus himself, modeled, that for us in Matthew, chapter 3, verse 13 through chapter 4, verse 25.

At the beginning of the passage, we see John, the baptist baptizing Jesus as soon as Jesus was baptized. He went up out of the water. At that moment heaven was opened and he saw the spirit of God descending like a dove and alighting on him and a voice from heaven said. This is my son, whom I love with him. I am well-pleased in Matthew, chapter 3, verses, 16 and 17.

Wow, god himself spoke from heaven, making clear to everyone that Jesus was indeed his son. Could there be a more perfect time for Jesus to launch into his public ministry? Why not walk straight from that baptism and heavenly proclamation into the streets and start doing miracles, because that wasn’t the plan instead, this is what happened immediately after Jesus was baptized, then Jesus was led by the Spirit into the wilderness to be tempted by the devil. After fasting for 40 days and 40 nights, he was hungry, Matthew, chapter 4, verses, 1 and 2.

Before Jesus could begin his public ministry, he was sent on a detour that tested all the limits of the human mind and body he’d chosen to take on in the verses that follow. We see the devil, repeatedly tempting tests and taunting Jesus for weeks. Jesus was alone hungry and thirsty and tormented by his enemy our enemy. At any moment, Jesus could have called the whole thing off. Instead, he stood firm, quoting scripture and faithfully living out.

The torturous earthly assignment he’d been given at the end of that excruciating time of trials. Jesus preached and gathered the men who would become his disciples. Matthew 4 ends. This way, Jesus went through galilee teaching in their synagogues, proclaiming the good news of the kingdom and healing every disease and sickness among the people. News about him spread all over Syria and people brought to him all who were ill with various diseases.

Those suffering severe pain. The demon possessed those having seizures and the paralyzed and he healed them. Large crowds from Galilee, the Decapolis…