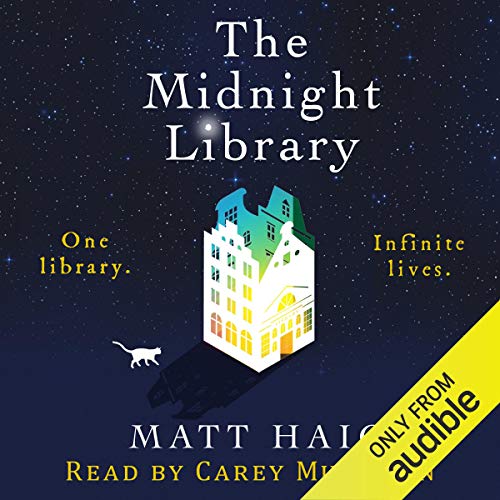 There is a library between life and death.

Nora Seed has a chance to make things right when she finds herself in the Midnight Library. Her life has been filled with misery and regret up until now. She believes she has disappointed everyone, including herself. But that is about to change.

Nora can live her life as if she had done things differently thanks to the books in the Midnight Library. She can now undo all of her regrets with the help of an old friend as she strives to live her ideal life. But things aren’t always as she expected, and her decisions soon put the library and herself in grave danger.

She must answer the ultimate question before time runs out: what is the best way to live?

Matt Haig (born 3 July 1975) is a journalist and author from England. He has written fiction and nonfiction books for both children and adults, frequently in the speculative fiction genre.

Haig was born in Sheffield on July 3, 1975. He then went to the University of Hull to study English and History.

Haig has written both fiction and nonfiction for both children and adults. Reasons to Stay Alive, his nonfiction book, was a Sunday Times best-seller and spent 46 weeks in the UK top ten. Father Christmas and Me, his best-selling children’s novel, is currently being adapted for film by Studio Canal and Blueprint Pictures.

His novels are frequently dark and quirky depictions of family life. The Last Family in England is a retelling of Shakespeare’s Henry IV, Part 1 with dogs as the protagonists. His second novel, Dead Fathers Club, is based on Hamlet and tells the story of an introspective 11-year-old dealing with his father’s recent death and the appearance of his father’s ghost. The Possession of Mr Cave, his third adult novel, is about an obsessive father desperately trying to keep his teenage daughter safe. Shadow Forest, his children’s novel, is a fantasy that begins with the horrifying death of the protagonists’ parents. In 2007, it was awarded the Nestlé Children’s Book Prize. In 2008, he released the sequel, Runaway Troll.

The Radleys, Haig’s vampire novel, was released in 2011. He published The Humans in 2013. It is the story of an alien who assumes the identity of a university lecturer whose work in mathematics threatens the planet’s stability and who must also deal with the home life that comes with his job.

Haig published How to Stop Time in 2017, a novel about a man who appears to be 40 but has lived for over 400 years and has met Shakespeare, Captain Cook, and F. Scott Fitzgerald. In an interview with The Guardian, Haig revealed that StudioCanal films had optioned the book and that Benedict Cumberbatch was «lined up to star» in the film adaptation. Reasons to Stay Alive was the 2016 winner of the Books Are My Bag Readers’ Awards, and How to Stop Time was nominated in 2017. [8] In August 2018, he wrote lyrics for Andy Burrows’ music album, the title of which was inspired by Haig’s book Reasons to Stay Alive.

Matt Haig’s novel The Midnight Library, about a young woman named Nora Seed who is unhappy with her life choices, was published in 2020. During the night, she attempts suicide but ends up in a library run by Mrs. Elm, her school librarian. The library stands between life and death, with millions of books filled with stories of her life if she had made different choices. She then attempts to find the life in which she is most content in this library. It was nominated for «Fiction book of the year» in the 2021 British Book Awards. The Midnight Library was adapted for radio and will be broadcast on BBC Radio 4 in ten episodes in December 2020.

Haig appeared on Storybound (podcast) in 2021, accompanied by an original score by Robert Wynia.