The Book of Lost Names Summary

The Book of Lost Names Summary

Summary of The Book of Lost Names by Kristin Harmel 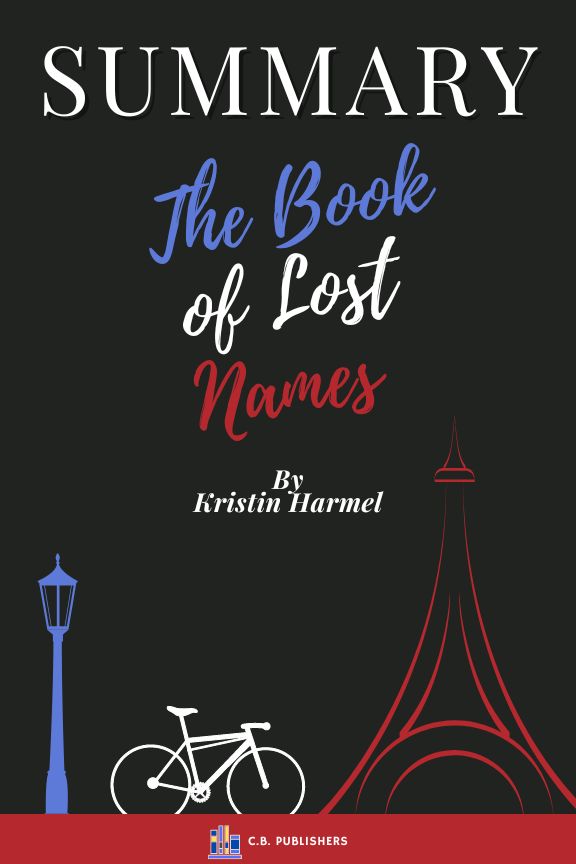 Chapter by Chapter Summary and analysis of Kristin Harmel´s book The Book of Lost Names, including detailed summaries of the chapters of the original book.

About The Book of Lost Names book

Eva Traube Abrams, an 86-year-old widowed librarian, notices a photograph in the newspaper of a German librarian attempting to reunite Nazi-stolen books with their previous owners in 2005. She recognizes the book he is holding as one she had 60 years ago and plans a trip to Berlin to retrieve it.

The story then returns to Eva, a young Jewish student at Paris’ Sorbonne in 1942. After her father is arrested during a Nazi mass roundup, Eva is left in charge of the family. Eva does not have time to mourn as her mother suffers from depression. Because of her father’s connections, she relocates her family to Aurignon, a small town in Free France. There, she meets Père Clément, a Catholic priest and liaison for the French resistance movement. Her artistic abilities allow her to make a name for herself by forging false documents to transport Jewish children safely across the Swiss border.

Not long after she begins forging documents in the church library, Eva meets Rémy, a fellow forger whose charm and confidence immediately captivate her. Rémy drives Eva back to Paris to inquire about her father, only to discover that he has been deported to Auschwitz, where he will most likely perish. Eva’s mother is devastated by the news, but she is determined to assist as many people as she can in escaping these atrocities. At the same time, she does not want the Jewish children’s true identities to be lost, as well as everything else in their lives. She uses an old Catholic theology book, Epitres et Evangiles, and a secret coding system devised by Rémy to keep track of all the children’s true names. They call it the Book of Lost Names in the hope that one day it will help them discover the truth.

As the Germans became suspicious of possible forgery activities in the area, Eva and the other workers needed to be protected. Gérard Faucon, a resistance leader, approaches her and asks to speak with her. When she meets Faucon, she realizes he is Joseph Pelletier, one of her childhood friends. Rémy’s departure coincides with their meeting because he was assigned to accompany children across the border rather than forge documents.

This hurts Eva, who has fallen in love with him. Père Clément brings Eva to the safehouse to meet some of the children for whom she fabricates false documents in order to distract her from his absence. Eva’s encounter with the children gives her the emotional connection she’s been looking for, and it inspires her to do everything she can to help them. Despite the fact that Rémy has been replaced by Geneviéve, Eva still mourns the loss of the man she loves.

Eva must accept that if the Nazis apprehend Rémy, the truth about their network and location may be extracted through torture. Fortunately, her falsified documents provide his alibi, and he is released, only to return to the front lines.

One night, Eva overhears Père Clément conversing with a German officer. Her initial fear and suspicion are dispelled when she discovers that the officer, Erich, is a spy for the resistance who has turned against Germany. The children can flee because Erich is the one who informs Père Clément about German locations and movements. A few months later, Erich informs them that the Germans are planning a large raid in Aurignon.

Eva is asked to accompany a group of children and goes to meet them, only to find out that Rémy, whom she hasn’t seen in months, is also with them. They get the kids to safety and then make love in a safe house near the border, but by the time Eva wakes up the next morning, he’s gone. When Eva returns to a nearby church, she comes across an Aurignon resistance fighter who informs her that the entire network has been exposed: Germans have apprehended everyone involved in the forgeries and are looking for Eva. Eva’s mother has also been kidnapped due to familial ties. Eva rushes to the small prison in disguise in search of her mother, only to discover that she has already been executed. Eva is devastated and goes in search of Joseph to seek assistance.

Rather than finding Joseph, Eva discovers Geneviève, who has died of a gunshot wound to the stomach. She reveals that Joseph was the traitor who shot her and betrayed the resistance for not revealing Eva’s location. Eva returns to the church library, knowing that Joseph will be looking for her, and leaves a secret note for Rémy in the Book of Lost Names, hoping that one day he will find it. Erich appears and kills Joseph before he can shoot her. Joseph arrives and begins torturing her for information. To distract Eva from the approaching Nazi soldiers, Erich pulls the trigger on himself.

Eva returns to Paris a year after the war has ended. She waits for Rémy to return to her, but he never does. Eva is surprised to see her father among the concentration camp inmates when Allied troops liberate them. He advises her to go back to Aurignon to learn more about Rémy. Père Clément tells her that Rémy died in the war.

Eva requests to see the Book of Lost Names see if he ever found and responded to her secret message, but all of the church’s books were stolen by the Nazis. Eva returns to Paris, where her father encourages her to continue living her life. A few days later, she meets Louis Abrams. They marry, settle in America, and have a son named Ben. Eva never tells her family about her past heroic deeds.

The novel concludes with Eva, 86, arriving at the Berlin library, where the librarian, Otto Kühn, is holding the Book of Lost Names. When she opens it, she finds all the usual Jewish children’s name codes, but no special message from Rémy, indicating that he never found hers: «Marry me.» «I like you.» The library receptionist interrupts Eva’s explanation of the coding system to inform them that an older man has arrived and claimed ownership of the book. Eva storms outside, furious, in search of Rémy, who pretended to die during the war. They both waited, despite the fact that they were only a few years apart. Finally, in the Book, he says «yes» to her proposal, and they start their lives together with «all the chapters still unwritten.»