Skill It Kill It Audiobook

Skill It Kill It Audiobook 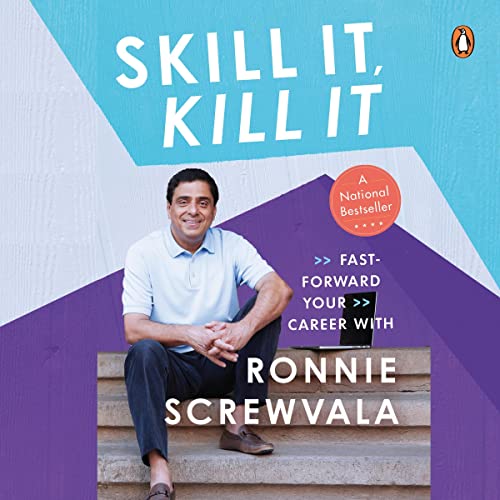 Have you ever wondered why CEOs, leaders, and recruiters are so concerned with soft skills? Soft skills give you a major professional advantage in a range of scenarios, including job interviews, promotions, appraisals, teamwork, managing workplace obstacles, communication skills, and a variety of other responsibilities.

Ronnie Screwvala shares personal anecdotes and observations from his many failures and few successes in this book to give you an insider’s view of the «invisible» skills that can shorten your learning curve by years. Skill It, Kill It is a practical, actionable book that will ensure you’re future-proof in these ever-changing times and ready to stand out among your peers. If you’re willing to RISE, COMMIT, LISTEN, SACRIFICE, and WANT IT BADLY. Then your time has come! Hello and welcome to #LifeLongLearning.

Ronnie Screwvala is an Indian film producer who also serves as the CEO and Founder Chairman of the ‘UTV Group’ (UTV Software Communications, UTVi, and UTV Motion Pictures). UTV expanded its global reach by partnering with Walt Disney, Fox Searchlight, Sony, and Will Smith’s Overbrook Entertainment Production firm. He was selected to Esquire’s list of the 75 Most Influential People of the Twenty-First Century in September 2008.

In June 1981, Ronnie (Rohinton) Screwvala launched the first organized cable TV venture in Mumbai. At a monthly charge of Rs 200, the Network supplied three hours of video channel presenting movies to homes in Maker Towers on Mumbai’s affluent Cuffe Parade. Within a few years, the Network had thousands of local households subscribing to its services.

With the success of the Cable Network, he began producing ad films and selling airtime on India’s national network, Doordarshan (DD), paving the path for the production of TV serials. In 1994, he began producing India’s daily soap operas and later expanded into films, animations, and interactive programming (gaming). One of his most well-known television serials is ‘Lifeline.’

He founded UTV Software Communications in 1990 and then expanded into film production, movie distribution, family-oriented channels, and web content. After going public on the Bombay Stock Exchange (BSE) in 2005, the company expanded fast over the next three years.

UTV launched its initial venture into Indian television in 2004 with Hungama TV, a Hindi children’s channel that competed with two global behemoths, Disney and Time Warner. It purchased Japanese animation shows and produced local language shows, propelling it to the top of the children’s market.

In February 2008, Disney’s Southeast Asian subsidiary increased its interest in UTV from less than 15% to more than 30%, and UTVi, an English business news channel, was launched.

Screwvala has played an important role in strengthening ties with Hollywood. He worked on the Chris Rock comedy I Think I Love My Wife, as well as M Night Shyamalan’s ‘The Happening.’ His UTV also supported Mira Nair’s «The Namesake,» which grossed more money in the United States than any other Indian production to date.

Mr. Screwvala is married to Zarina, a prominent executive and co-founder of UTV. They dwell in Mumbai’s Breach Candy neighborhood.

In the first seven years of my working life, I took great pride in being a multitasker. I even gave myself a nickname Mt for multitasker back then multitasking was my addiction. It gave me high thinking about how super-efficient, productive, and ahead of the game. I was it got so bad in fact that it spilled over into my personal life and made me anti-social even with my own family, my wife Arena and my daughter, Trisha, and I would go to a restaurant for dinner. But instead of chatting and enjoying a leisurely meal together, I would stare into my plate and shovel food into my mouth quickly with my brain, a million kilometers away.

During this time I ignored the early signs that my multitasking addictions were out of control. I felt exhausted, had no energy, and was socially distant from friends and family. Had I taken an honest assessment, I would have realized that I was clearly less productive, unfocused all over the place mentally, and distracted. I got fewer things done that were of high quality. Another early sign, I gained four kilos because I was so busy multitasking during meals that I ate more and focused less on what I was eating.

Then two things happened that woke me up and helped me break my absurd multitasking addiction. The first of these moments was in a super important meeting for which I had prepared well, and I delivered a strong performance when it was my turn to talk. But then, in my multitasking arrogance, I switched off for 10 minutes to catch up on my messages. After all, I was superhuman and could switch off and on anytime right wrong as it turned out. Those 10 minutes were the most important part of the entire meeting.

When my attention returned to the room, I made an utter fool of myself by asking questions. Everyone had already answered and bringing up topics they had just discussed they stared at me like I was an idiot. I embarrassed myself in front of people. I wanted to impress and made a sour impression, but the final straw that helped me break my multitasking addiction came when I took my dog for a walk there. I was with my earphones on making calls recording notes, and trying to do several things at once, and I didn’t see my golden labrador playfully lunging at me with a frisbee I had thrown him.

I was so distracted that I fell backward. Stretched out my hand to break my fall and fractured my wrist. That was it. The message to me was loud and clear. I had to change my ways fast and I did and I never looked back – it’s been a total game-changer for me today.

I get so much more done because I do not get multi-distracted in my pursuit to multitask the multitasking myth. Let me break up multitasking into three categories: one multitasking. When you are permanently in a state of distraction, this is the worst you want to do. Four things at the same time and can’t focus on anything at hand because your eyes are on the next message in your inbox, your ear just heard the phone ring your mind is on three things. You don’t want to forget.

Yet you are in the middle of this important conversational meeting where, if you miss out on the important takeaways, you are not going to be able to complete the assignment later two multitasking when you are overwhelmed, you are constantly trying to catch your tail and finish your Tasks, remember half the time you are overwhelmed with the exhaustion of feeling like there is so much to do. You have so many tasks, but not enough hours in a day. But the simple point here is that multitasking is not allowing you to stop prioritizing and planning. It’S a vicious circle. You feel that if you pause to take time to think plan and prioritize, you may become even more behind on your work.

So you just keep going until well until nothing as it’s not going to change till your mindset changes and you realize that the fault at most times is not on the tasks that company your boss or peers.