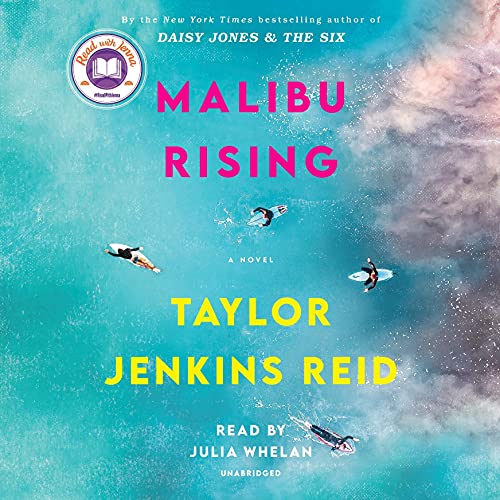 To celebrate the end of the summer, four famous siblings throw an epic party. But the family drama that unfolds over the next twenty-four hours will change their lives forever.

August 1983, Malibu. It’s the day of Nina Riva’s annual end-of-summer party, and excitement is high. Everyone wants to be around the famous Rivas: Nina, the talented surfer and supermodel; brothers Jay and Hud, one of whom is a championship surfer and the other a renowned photographer; and their adored baby sister, Kit. The siblings are a source of fascination in Malibu and around the world, especially as the children of legendary singer Mick Riva.

The only person who isn’t looking forward to the year’s biggest party is Nina, who has never wanted to be the center of attention and has recently been publicly abandoned by her pro tennis player husband. Oh, and Hud—because it’s long past time for him to confess something to the brother he’s been inseparable from since birth.

Jay, on the other hand, is counting down the minutes until the girl he can’t stop thinking about says she’ll be there.

And Kit has a few secrets of her own, including a visitor she invited without informing anyone.

The party will be completely out of control by midnight. The Riva mansion will be in flames by the morning. But, before that first spark in the early morning hours, the alcohol will flow, the music will play, and the loves and secrets that have shaped this family’s generations will all bubble to the surface.

Malibu Rising is a story about one unforgettable night in a family’s life: the night they each have to choose what they will keep from the people who created them… and what they will leave behind.

Taylor Jenkins Reid is a New York Times bestselling author and screenwriter who has written eight novels about love in all its complexities. She speaks and writes openly about women’s issues, relationships, marriage, and the writing process. Carrie Soto Is Back (August 2022), her upcoming novel, is a powerful novel about the cost of greatness, in which a legendary athlete attempts a comeback when the world considers her past her prime.

Reid’s most recent novel, Malibu Rising, is a New York Times bestseller that follows the four famous Riva siblings as they throw an epic summer party. The events of that night in 1983 reveal many secrets that have shaped this family’s generations, and the lives of the Rivas are forever changed. Reid writes a powerful story of historical fiction in her beloved, signature style, exploring fame, family, identity, and the impact of secrets revealed. Malibu Rising is a #ReadWithJenna book club selection that is being adapted into a Hulu television series.

Daisy Jones & The Six (another New York Times bestseller) tells the story of a fictional 1970s rock band and what led to their rise and fall from fame. Taylor Jenkins Reid, in addition to writing the novel, also wrote the lyrics for each song featured in the book. The novel was picked up by Reese Witherspoon for her monthly book club and by Hello Sunshine, Witherspoon’s production company, for an Amazon limited television series starring Riley Keough before it was published. Several media outlets, including NPR, The Washington Post, Esquire, Glamour, Real Simple, Good Housekeeping, Marie Claire, and others, named Daisy Jones one of the best books of 2019. The audiobook was also named one of Apple Books’ Best Audiobooks of 2019.

Taylor Jenkins Reid is also the bestselling author of The Seven Husbands of Evelyn Hugo, which follows the story of a fictional Hollywood icon and her glamorous life and marriages. Evelyn Hugo is currently being adapted into a film.

Her other books include One True Loves, which was made into a film with Reid and her husband Alex Jenkins Reid co-writing the screenplay, Maybe in Another Life, After I Do, and Forever, Interrupted. Reid’s novels have been featured in People, US Weekly, Entertainment Weekly, Good Morning America, Goodreads, and other publications.

27Th at the home of Nina Riva during one of the most notorious parties in Los Angeles history, the annual party grew wildly out of control sometime around midnight by 7. Am the coastline of malibu was engulfed in flames because, just as it is in malibu’s nature to burn so was it in one particular person’s nature to set fire and walk away from Saturday august, twenty-seventh nineteen. Eighty three-part: one: seven a.m to 7 p.m: 7!

A.M! Nina Riva woke up without even opening her eyes consciousness seeped into her slowly as if breaking the morning to her gently, she lay in bed dreaming of her surfboard underneath her chest in the water before she began, remembering the reality that hundreds of people were going to descend Upon her house in just over 12 hours as she came to it, dawned on her once again that every single person who would show up tonight would know the indignity of what had happened to her. She lamented it all without even peeking, through the curtains of her own eyelashes. If Nina listened closely, she could hear the ocean crashing below the cliff just faintly.

She had always envisioned buying a home like the one she and her siblings grew up in down on old malibu road, a shabby beach bungalow off of PCH, built on stilts, and extended out over the sea. She had fond memories of sea spray on the windows of half-rotted wood and rusting metal holding up the ground beneath her feet. She wanted to stand on her patio and look down in order to see high tide and hear the waves crashing loudly underneath her, but Brandon had wanted to live on a cliff, so he’d gone and bought them. This glass and the concrete mansion are in the cliffside enclave of point. Doom 50 feet above the coastline a steep walk down.

From the rocks and steps to the breaking waves Nina listened as best she could to the sounds of the water and she did not open her eyes. Why would she there was nothing for her to see? Brandon was not in her bed: Brandon wasn’t in the house, Brandon wasn’t even in malibu, he was at the Beverly Hills Hotel, with its pink stucco and its green palm trees. He was most likely at this early hour, cradling Kerry Soto in his sleep. When he woke up, he would probably take his big paw of a hand and move her hair out of the way and kiss her neck, and then the two of them would probably start packing together for u.

open, Nina, didn’t hate, Carrie Soto for stealing her Husband, because husbands can’t be stolen, Kerry Soto wasn’t a thief. Brandon Randall was a traitor. He was the sole reason Nina Riva was on the cover of the August 22nd issue of now this magazine under the headline Nina’s heartbreak, how one half of America’s golden couple got left behind. It was an entire article dedicated to the fact that her tennis, pro husband, had publicly left her for his tennis pro mistress. The cover image was flattering enough.

They had pulled one of the photos from her swimsuit shoot in the Maldives earlier that year she was wearing a fuchsia high leg, bikini her dark brown eyes, and her thick eyebrows were framed by her long brown, hair lightened from the sun. Looked a tad wet, a faint curl still in it, and then, of course, there were her famous lips, a billowy bottom lip topped by her thinner upper lip. The riva lips as they had been dubbed when they were made famous by her father mick in the original photo nina, was holding a surfboard, her yellow and white town and country. Six foot two inch thruster on the cover. They had cropped it out, but she was used to that by now inside the magazine there was a picture of nina in the parking lot of a ralph’s grocery store from three weeks prior nina had been wearing a white bikini with a flowered sundress thrown on over It she’d been smoking a virginia slims and carrying a six-pack of tab.

If you looked closely, you could tell she had been crying next to it. They’D put a photo of her father from the mid-sixties. He was tall dark and conventionally handsome in a pair of…