Summary of Crying in H Mart by Michelle Zauner 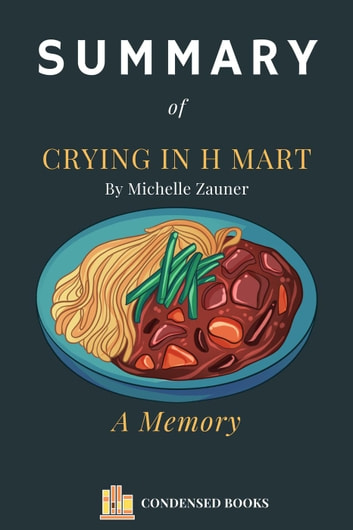 A high-quality summary of Michelle Zauner´s book Crying in H Mart, including chapter details and analysis of the main themes of the original book.

About Crying in H Mart book

In this magnificent story of family, food, tragedy, and endurance, Michelle Zauner demonstrates that she is far more than a talented singer, songwriter, and guitarist. She describes growing up as one of the few Asian American students in Eugene, Oregon; struggling with her mother’s high expectations for her; painful adolescence; and cherished months spent in her grandmother’s tiny apartment in Seoul, where she and her mother would bond late at night over heaping plates of food.
Her Koreanness grew increasingly distant as she grew older, relocating to the East Coast for college, finding work in the restaurant industry, and performing gigs with her nascent band—and meeting the man who would become her husband—all while finding the life she desired. Michelle’s identity was forced to cope with when her mother was diagnosed with terminal cancer when she was twenty-five years old, and she was able to recover her mother’s gifts of taste, language, and history.
Zauner’s voice is as vivacious and plainspoken on the page as it is on stage, poetic and honest. Crying at H Mart is a book to savor, share, and reread, full of personal experiences that will resonate with a wide audience and illustrated with family photos.