Summary of Caste: The Origins of Our Discontents by Isabel Wilkerson 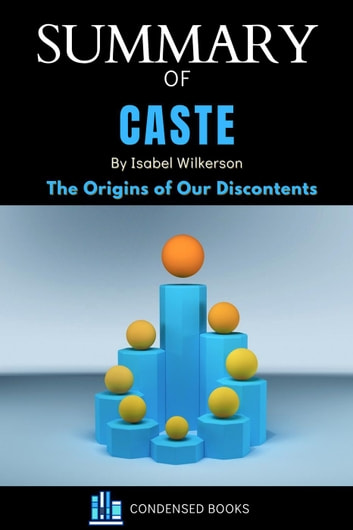 A high-quality summary of Isabel Wilkerson´s book Caste: The Origins of Our Discontents, including chapter details and analysis of the main themes of the original book.

Isabel Wilkerson paints a masterful portrait of an unseen phenomenon in America in this brilliant book, in which she explores how a hidden caste system, a rigid hierarchy of human rankings, has shaped America today and throughout its history through an immersive, deeply researched narrative and stories about real people.

A powerful caste structure controls people’s lives and conduct, as well as the nation’s fate, independent of race, class, or other circumstances. Wilkerson investigates eight pillars that underpin caste systems across civilizations, including a divine will, bloodlines, shame, and more, by connecting the caste systems of America, India, and Nazi Germany.

She explains how the insidious undertow of caste is experienced every day by using gripping stories of people like Martin Luther King, Jr., baseball’s Satchel Paige, a single father and his baby son, Wilkerson herself, and many others. She argues why the brutal logic of caste needs that there be a bottom rung for those in the center to measure themselves by; she speaks on the unanticipated health costs of caste, such as depression and life expectancy, as well as the effects of this hierarchy on our society and politics.

Finally, she suggests methods for America to move beyond the artificial and harmful differences that characterize human divisions and toward optimism in our shared humanity.

Caste: The Origins of Our Discontents is a beautifully written, original, and fascinating account of people and history, as well as a reexamination of what lies beneath the surface of ordinary lives and of American life today.