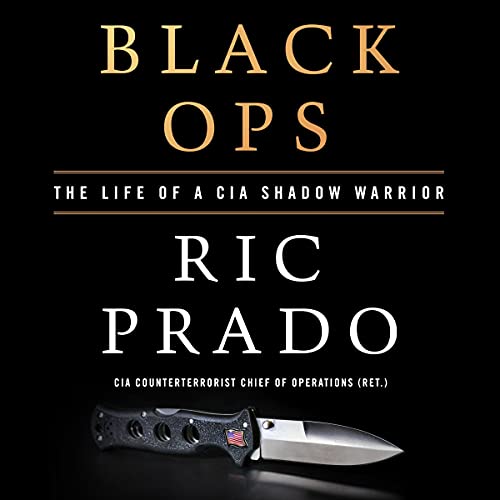 A memoir by America’s highest-ranking covert warrior that lifts the veil of secrecy and gives a glimpse into America’s shadow wars since the Vietnam War.
Enrique Prado had his first firefight when he was seven years old. As the son of a middle-class Cuban family caught in the midst of the Castro Revolution, his family fled their war-torn homeland in the hope of a better life in America. Fifty years later, the Cuban refugee retired from the Central Intelligence Agency as the CIA’s equivalent of a two-star general. In Black Ops, Ric’s legendary career is chronicled, which spanned two eras: the Cold War and the Age of Terrorism. Ric and his CIA colleagues fought a little-known and virtually unknown war to protect the United States from those who would harm it.
After duty stations in Central, South America, and the Philippines, Black Ops follows Ric into the highest echelons of the CIA’s headquarters in Langley, Virginia. In late 1995, he was named Deputy Chief of Station and a co-founder of the Bin Laden Task Force. After three years as the head of Korean Operations, Ric took on one of the most dangerous missions of his career: re-establish a once-abandoned CIA station inside a hostile nation that had long been considered a front line in the fight against Islamic terrorism. He and his team conducted covert operations and developing assets that would be critical in the coming War on Terror.

And realized the depth of my love and appreciation for America. Where else could a Cuban-born once orphaned boy go from Miami’s back alley, brawls to the heart of the nation’s first line of defense? Those fledgling days in the agency opened the door to a world. I did not know existed sure I happily read Ian fleming’s James bond books, but the 007 spy universe bore no resemblance to the full contact dark world. That became my life for the next few decades.

Bond had his gold fingers and his doctor knows, but in the shadows, we operated in, we faced no such cartoonish villains. Instead, we battled caudillos and communist guys anarchists, insurgencies narco-terrorist groups, proliferators of weapons of mass destruction, traffickers of people, drugs, and illegal weapons. I saw my family’s life in Cuba destroyed by such people. Now the central intelligence agency gave me a chance to strike back at them. I started that new life in the jungles of northern Nicaragua working closely with the Nicaraguan contras men and women vilified by the American press, yet who I knew to be two patriots wanting to liberate their country from the depredations of a carbon copy of Castro’s regime with Them I saw firsthand how the Sandinistas marauded through Nicaragua countryside, plundering from the already impoverished, inflicting starvation upon long-suffering it population.

I saw how their vicious tactics drove desperately traumatized people into the ranks of the contras where they were willing to live in the most primitive conditions imaginable. Armed with ancient weapons cast off by the Israeli army, they faced every manner of the jungle, disease, privation, and sudden death. They did it with virtually no pay armed only with the resolve that the Sandinista reign of terror had to be stopped. If Nicaragua was to ever be free for three years, I helped fight the war against the communist Ortega regime. I emerged from the jungle hardened to the realities of the dark world.

I become a blunt instrument at ease with a weapon in hand and a target to take out that Cuban kid who lost his native country to revolutionaries now helped cut off. Some of the communist tentacles that threatened to engulf Latin America. Ultimately, our contra program was a definitively successful black op carried out solely by key personnel from the CIA, but under legendary bill Casey in Dewey clearage, the latter, a beloved mentor of mine. This program grew a hundredfold and our collective effort, with the contrast, resuscitated the post-Vietnam, decimated CIA, back to relevance in 1984. The agency ordered me from the Honduran jungles and sent me to the farm to learn to be more than a paramilitary operator.

I was trained on the dead, dropping running agents, conducting surveillance, and evading enemy tails. This was another new universe. For me, one of finesse in the shadows of everyday life. It stood in stark contrast to the years I spent being at the pointy end of the spear. Yet it was a new way of standing on our nation’s ramparts.

That appealed to me, the men and women I met at the farm, were not Jason, bournes, or Ethan hunts of the silver screen there were men and women devoted to one cause, keeping our country and our people safe from those who intend to do hosa harm. Sometimes we succeeded sometimes we failed, but that was always our mission, our calling our life’s purpose, the same courage, conviction, and guile that it took to operate in the jungles, applied to how my colleagues and I operated in a much more complex and treacherous jungle. A jungle of criminality, corruption, betrayals, and the atrocious human rights abuses we were determined to help eradicate in the back alleys of the world. I saw how we fought back against these forces and how sometimes our own sense of right and wrong undermine our ability to stop a foe that behaved with absolutely no scruples or humanity from the point of the spear to the velvet fist of the shadow world. My career took me through a full spectrum of how the agency defended America when the wall fell.

I joined the counterterrorism fight like most of us. 9 11 was a life-changing event for me. I owned the best job at the CIA at the time chief of operations with the counter-terrorist center, but the truth is that my role behind the front lines in the fight against al Qaeda wasn’t my course. Every time I…