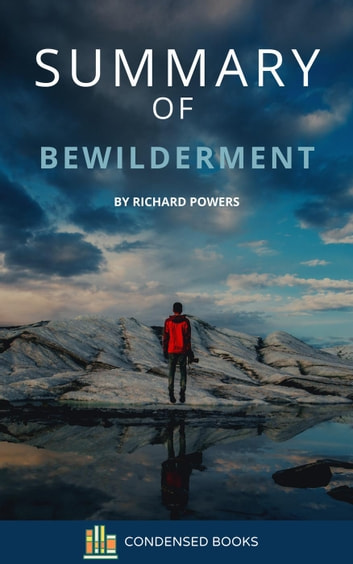 A high-quality summary of Richard Powers´s book Bewilderment, including chapter details and analysis of the main themes of the original book.

About the original Bewilderment book:

After his wife’s death, astrobiologist Theo Byrne searches the cosmos for life while raising his amazing nine-year-old son, Robin. Robin is a lovely, polite young man who spends many hours meticulously painting realistic images of endangered animals. He’s also on the verge of being expelled from third grade after hitting a student in the face. As his son becomes more difficult, Theo attempts to keep him off psychotropic drugs. He hears about experimental neurofeedback treatment for Robin’s emotional management, which involves teaching the kid about his mother’s recorded brain patterns…

With its soaring descriptions of the natural world, enticing glimpses of life beyond, and the tale of a father and son’s intense love, Bewilderment is Richard Powers’ most intimate and emotional novel. The central difficulty is this: how can we teach our children the truth about this beautiful, imperiled world?

Theo Byrne is an astrobiologist who specializes in extraterrestrial life research. His wife, Alyssa, died two years ago, and he is now responsible for their son, Robin. Theo refuses to give his son psychotropic medications because Robin has multiple neurodivergent disorders. Robin makes a journey with his father to the cottage where Theo and Alyssa spent their honeymoon after an outburst at school. Alyssa was a passionate animal rights advocate who instilled her love of the environment in her kid.

Theo and Robin trek and then swim in a creek together during their stay at the cabin, and Theo is concerned about what will happen to Robin when they return to their usual life. Furthermore, Theo is desperately attempting to ignore the news of increasingly prevalent climatic disasters. When Theo and his father get home, Theo tells Robin about imaginary, faraway planets as though they were bedtime stories.

Robin had a quarrel at school with another youngster, and Theo has taken time out of his busy schedule to assist his son. He talks to the school psychologist about Robin’s issue, and the doctor underlines that Robin has to work on his social skills. Robin confesses to hitting another youngster for denigrating his mother’s memory, and Theo consoles him. Robin devises a plan to protect the environment in honor of her: he plans to paint every endangered species in America and sell the paintings to generate money for environmental causes. Theo encourages Robin, but the strategy backfires when Robin insists on skipping school to focus on the project.

Dr. Martin Currier, an old acquaintance of Alyssa’s, is visited by Theo. Currier studies brain scans and emotional states as a neuroscientist. Alyssa and Theo had taken part in one of Currier’s experiments many years before. Theo inquires about Robin’s issues. Currier proposes that Robin participates in a new study that will use a scan of Alyssa’s emotional state to assist Robin to learn to control his emotions. Theo finally agrees to include Robin in the experiment after some debate. Robin makes a great improvement over several weeks. Theo appreciates Currier’s help, but he believes Currier slept with Alyssa.

Robin keeps painting, inspired by other teen activists he comes across on the internet. As the political climate in the United States becomes increasingly chaotic, he sells his paintings and attempts to organize a protest at the state Capitol. Because of Currier’s sessions, Robin’s personality dramatically alters. He develops a likable and friendly demeanor while keeping emotional control. He is still enthralled by nature and eagerly shares his enthusiasm with others.

When Robin declares he wants to homeschool, Theo is taken aback. After some deliberation, Theo decides to back down. He tries to strike a balance between his professional obligations and Robin’s requirements. The rate at which Robin learns, on the other hand, astounds Theo. Currier is so delighted with Robin’s accomplishments that he asks Theo to help seek funds using Robin’s statistics. Theo eventually agrees, but Robin’s progress becomes a sensation: he becomes renowned, and his genuine optimism and love of nature are broadcast around the world via viral online recordings.

Theo arrives in Washington, DC, to discuss funding for a major extraterrestrial life search mission. Robin joins him and creates a banner to promote environmental awareness. Although Theo’s speech fails miserably, many people are intrigued by Robin’s banner. Because Theo and Robin do not have a permit, the cops interfere. Theo retaliates angrily, and the increasingly fascist cops detain him. Currier admits that his research has been defunded due to political difficulties as the country slips into instability. As a result, Robin’s sessions must come to an end. Robin’s conduct begins to shift gradually. Despite fighting back against the procedure, he loses all of his progress.

Theo tries to assist Robin by returning him to the woodsy cabin. They relive their previous vacation, but they discover that the creek where they swam previously has been changed. Robin sneaks out of the tent one night and attempts to restore the stream to its original form. He, on the other hand, spends far too much time in the frigid water. It’s too late by the time Theo locates him. Robin passes away. While environmental disasters persist, Theo mourns his son’s loss. Currier offers Theo the opportunity to communicate with Robin via his old brain scans, which Theo gladly accepts.