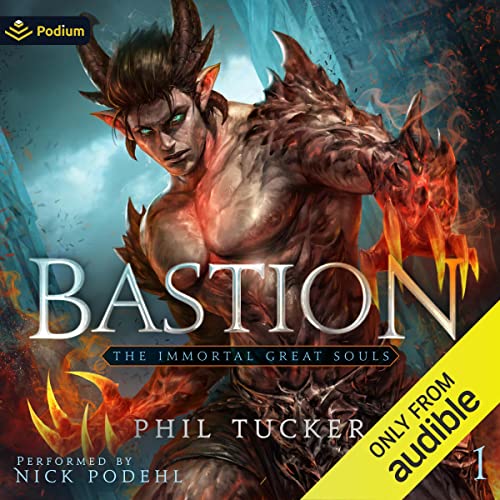 Scorio is reborn with no memories and learns that he is a Great Soul, a well-known defender of Bastion’s old city. Within the sacred halls of the Academy and under the stern eyes of the underworld’s best instructors, he will experience immense privilege, rediscover unique and marvelous powers, and one day return to the millennium-old war against their demonic opponents.
That is until he is betrayed. Scorio is singled out and sentenced to death for crimes he has no recollection of, only to be forgotten.
Even the tiniest spark, however, has the potential to turn into a raging fire.

Scorio is determined to return to the Academy after clawing his way back from oblivion. To rise through the ranks and change the course of history within those golden walls by surviving the wreckage and defeating his top classmates. Only then will he learn about his long-forgotten past and why his enemies have feared him since his resurrection.

Scorio awoke from death in a tomb of hammered, copper, his breath echoed harshly within the stark confines of his chest. Heaved and his eyes grew wide drinking in the faint blood orange glow seeping into the air from a rectangular hole in the ceiling with a convulsive jerk. He sat up and swung his legs over the side of the beer on which he’d lane there was darkness all around made thick and swarming by the mere hint of light from above he grimaced blinked his eyes owlishly and tried to stir thoughts into motion. He sat there in a stupor slowly coming back to himself until at last he once more studied the rectangular hole it hovered some eight or ten feet. Above him, the steady ruddy light came from a source outside his line of sight.

He couldn’t make anything out, but a great sense of the enormity of the scale of height, drawing deep breaths. He carefully stood up on the beer, his legs still weak. His balance was unsteady no telling how far the drop to the floor was. Perhaps a yard, perhaps more the darkness at the base of the beer was absolute. He rubbed his hands together and stretched up to the hole it hovered a few feet above his fingertips.

Scorio drew his hands back, wiped them on his hips, rocked a little from side to side, as he prepared himself then leaped. It was a weak first attempt. He didn’t even brush the ceiling before falling back again. He leaped then again and a fourth time before casting around for some other means to get out. The beer was large, so he stepped to its head, measured how many steps he could safely take then strode forward, half crouched and whipped his arms around and up leaping again, this time his hands slapped against the hole’s broad metallic rim and his fingers curled over the Uppermost edge gritting his teeth, scorio hauled himself up arms shaking muscles burning until he was able to pull his head out his eyes widened at the sight.

For a moment. He simply hung there shocked, but his body began slipping back into the tomb, so he heaved himself out rolled onto his back and sat up staring the space was so vast that for a moment he thought himself outside a great beam of luminous amber some 10 yards Wide split the darkness in the distance and rose to a great height before fading away. It’S shown like a slice of sun, richly golden and pitiless inhuman in its scale and without detail or depth. Scorio gaped in wonder only to realize that the beam was in fact a partition between two dark walls that drew close together at the top of a dozen steps steps. There were easily a hundred or more yards wide partitioning, the great plane on which he sat from the platform that led to the light light which turned the upper surface of each step to a rich maroon and which reflected off the ground in a feverish apocalyptic smolder.

Swaths of imperfection in the copper dimmed its burning glow, so its reflection looked like a bloody sun setting behind a haze of clouds. Scorio felt himself a speck before that immensity. It’S grandeur the floor on which he sat was patterned, with countless small rectangles, like his own, laid out with geometric precision shallow depressions uniformly, reflecting the amber light, showing they remained sealed his mind. Raced were others trapped below. Was he trapped here alone?

Where was he? What was this place was he meant to do something movement off to one side and he rose to his knees, peering as a shadow clambered up from a distant rectangle, its mouth dark, unsealed, eager, hesitant. He leapt to his feet, took a half dozen steps and stopped hello. The man for so it seemed rolled out and onto his back and lay there panting for breath. Scorio could sympathize what is began.

The man his voice, a powerful rumble, but his words trailed off. As he shifted onto his side, propped himself up and caught sight of the livid amber beam. Scorio walked towards him, taking care not to step into any of the rectangular depressions, even sealed, as they were, scored.