Atlas of the Heart Audiobook

Atlas of the Heart Audiobook 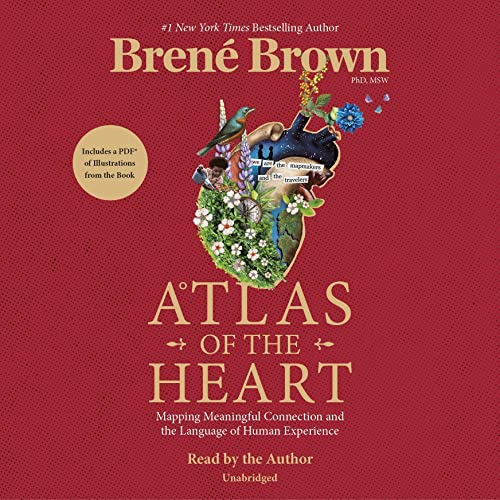 In her new book, Brené Brown writes, «If we want to find the way back to ourselves and one another, we need language and the grounded confidence to both tell our stories and be stewards of the stories that we hear,» Genuine connection is built on this foundation. In Atlas of the Heart, Brown takes us on a journey through 87 emotions and experiences that define what it means to be human. She maps the necessary skills and an actionable framework for meaningful connection, giving us the language and tools to access a universe of new choices and second chances, a universe where we can share and steward the stories of our bravest and most heartbreaking moments with one another in a way that builds connection.
Over the last two decades, Brown’s extensive research into the experiences that shape who we are has shaped the cultural conversation and helped define what it means to be courageous. This research, as well as Brown’s unique storytelling abilities, are used in Atlas of the Heart to show how accurately naming an experience gives us the power of understanding, meaning, and choice, rather than giving the experience more power.

Brown says, «I want this book to be an atlas for all of us,» because «because I believe that with an adventurous heart and the right maps, we can travel anywhere and never worry about getting lost.»

I’m always fascinated when I come across an old box of my own stuff, I mean I must have thought something was really important if it warranted saving. If you put all of my memorabilia and artifacts together, you would get the most accurate story of who I was and what I valued at any one point in my life and you’d probably need no more than a standard-issue, dining room table to lay it out. I came across this old college paper several years ago when I was starting this book. It’s not a grade or even a very good paper, but it knocked me off balance for a few months. I mean I’m looking at this paper and the title of it.

Of course, it’s written in script, you know not on a computer, just written on, you know ruled paper and the title of the paper is why we feel the pain we feel it starts out with this line throughout our lives. We must experience, emotions and feelings that are inevitably painful and devastating. Next to the title in red, you can see this tiny, a minus. The date on the paper is October, 9th 1984.

I mean why have I been thinking about emotions for so long?

Why has this always been so important? Can I even remember a time in my life when I wasn’t thinking about emotions, as I unpacked a few other things in the box, a lifeguard whistle poem I’d written a mixed tape from steve, and a few pictures? My time capsule transported me back to my flock of seagulls with an asymmetrical haircut and a 1974 Volvo 240d, with a floorboard that was so rusted out. I could see the road pass beneath as I drove. I spent a couple of days with my 1987 self and learned some things that I had either never known or never acknowledged or things I possibly once knew and pushed way down.

I come from a very tough suck it up and get it done and don’t talk about feelings, family both of my parents had a hard upbringing with a lot of trauma and despite their own unhappiness, they considered the life they gave us the height of mythical, suburban Bliss in their high school years, my dad was the rage and grief fueled football captain, and my mom was the head of the drill team and the president of half a dozen different clubs. She was everything she needed to be to redeem the reputation of what was inconceivable in the 1950s, leaving it to the beaver era. Having an alcoholic mother, when I was growing up, there was a lot of unpredictable behavior and intense emotion in our home. There was intense love and there was intense rage. There was intense laughter and intense hurt, but even the good times were dicey because they could turn in an instant I’m, the oldest of four.

So I often felt the brunt of the madness, along with the responsibility of protecting my siblings, from the unpredictable swings when things were bad. I was the protector when things were great. I was the protector in waiting always on the outside, of the fun easily teased. For being too serious, and always knowing that we were one sideways glance or one smart-ass comment from chaos. By the time I was in middle school, I had used a combination of my mom’s magazines and the after-school specials that I love to watch to diagnose myself.

As quote crazy, I know that’s a pathologizing word, but back then it was really all I had. First, nothing I mean nothing was discussed or normalized in my family, not feelings or fears or periods or friend problems or puberty or money issues or extended family members who struggled with addiction and mental health issues. Nothing we’re all good any question or attempt to understand the things that were clearly not good was immediately shut down in punitive ways for children. It’s easy for everything to become a source of shame when nothing is normalized. You assume that if no one is talking about it, it must be you.

Second, my parents were confusing. My parents were and are good people who did the very best they could with the tools they had. Sometimes those tools weren’t enough growing up. They seemed to be fun-loving, well-liked, smart, great storytellers, and caring neighbors people loved them because they were predictably good outside the house and wildly unpredictable inside. I assumed it was us and because I was the oldest I assumed it was mostly me and again it was shaming for all of us when the inside behaviors didn’t match the families on tv.