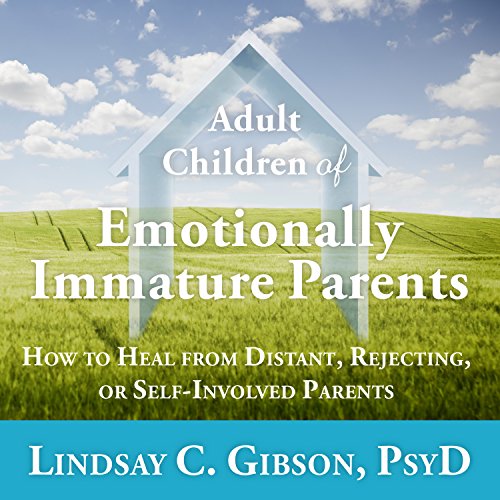 Lindsay Gibson, a clinical psychologist, exposes the destructive nature of emotionally immature or unavailable parents in this ground-breaking book. You’ll see how these parents foster a sense of neglect and learn how to heal from the pain and confusion of your childhood. You can recover your true nature, control how you react to them, and avoid disappointment by freeing yourself from your parents’ emotional immaturity. Finally, you’ll discover how to form positive new relationships in order to build a better life.

Noticing their children’s moods and welcoming their feelings with interest, a child feels safe connecting with such a parent, whether seeking comfort or sharing enthusiasm, mature parents make their children feel that they enjoy engaging with them and that it’s fine to talk about emotional issues. These parents have a lively, balanced emotional life and are usually consistent in their attentiveness and interest toward their children. They are emotionally dependable, emotional loneliness parents who are emotionally immature, on the other hand, are so self-preoccupied that they don’t notice their children’s inner experiences. In addition, they discount feelings and they fear emotional intimacy, they’re uncomfortable with their own emotional needs and therefore have no idea how to offer support at an emotional level. Such parents may even become nervous and angry if their children get upset, punishing them instead of comforting them.

These reactions shut down children’s instinctive urge to reach out closing the door to emotional contact if one or both of your parents weren’t mature enough to give you emotional support as a child, you would have felt the effects of not having it, but you wouldn’t necessarily have Known what was wrong, you might have thought that feeling empty and alone was your own private, strange experience, something that made you different from other people as a child. You had no way of knowing that this hollow feeling is a normal universal response to lacking adequate human companionship. Emotional loneliness is a term that suggests its own cure being on the receiving end of another person’s sympathetic interest. In what you’re feeling this type of loneliness isn’t an odd or senseless feeling, it’s the predictable result of growing up without sufficient empathy from others to round out this description of emotional loneliness. Let’S examine two people who vividly remember this feeling from childhood and describe it well david’s story: here’s how my client david responded when i commented that growing up in his family sounded lonely.

It was incredibly lonely like i was utterly isolated. It was a fact of my existence. It just felt normal in my family, everyone was separate from each other. We were all emotionally isolated. We lived parallel lives with no points of contact in high school.

I used to get this image of floating in the ocean with no one around me. That’S how it felt at home. When i asked him more about the feelings of loneliness. He said it was a sensation of emptiness and nothingness. I had no way of knowing that most people didn’t feel that way.

That feeling was just daily life. For me, ronda’s story rhonda remembered a similar aloneness when she was seven years old, standing by the moving truck outside her family’s old house with her parents and three older siblings. Although she was technically with her family, no one was touching her and she felt totally alone. I was standing there with my family, but nobody had really explained what this move would mean. I felt totally alone trying to figure out what was going on.

I was with my family, but i didn’t feel like i was with them. I remember feeling exhausted wondering how i was going to deal with this on my own. I didn’t feel like. I could ask any questions. They were totally unavailable to me.

I was too anxious to share anything with them. I knew it was on me to cope with this alone. The message within emotional loneliness, this kind of emotional pain and loneliness is actually a healthy message. The anxiety felt by david and ronda was letting them know that they were in dire need of emotional contact, but because their parents didn’t notice how they felt all they could do was keep their feelings inside. Fortunately, once you start listening to your emotions, instead of shutting them down, they will guide you toward an authentic connection with others.