A Breath of Snow and Ashes Summary

A Breath of Snow and Ashes Summary (OUTLANDER) 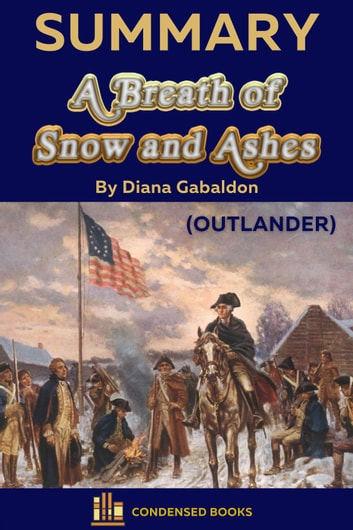 A high-quality summary of Diana Gabaldon´s book A Breath of Snow and Ashes (Outlander), including chapter details and analysis of the main themes of the original book.

About the original A Breath of Snow and Ashes book:

A Breath of Snow and Ashes is the sixth novel in Diana Gabaldon’s popular Outlander series, published by Delacorte Press in 2007. Its plot combines historical fiction, romance, adventure, science fiction, and fantasy elements. It earned the Quill Award for Science Fiction/Fantasy/Horror and debuted at #1 on The New York Times hardcover fiction best-seller list in 2005.

A Breath of Snow and Ashes Summay book is written by Condensed Books.

A Breath of Snow and Ashes Plot

The novel opens in North Carolina in March 1773, on Fraser’s Ridge, the colony led by Jamie Fraser, a Catholic Scottish Highlander. Claire Fraser, also known as Sassenach, is a time-traveling English doctor who married Jamie and opted to live in the past with him, their daughter Brianna, son-in-law Roger, grandson Jem, and nephew Ian.

With the use of valuable jewels, all of these characters can travel across time. Jamie and Claire’s house, the Big House on Fraser’s Ridge, will burn down in January 1776, killing everyone who lives there, according to a newspaper report from the future. Jamie is sent to negotiate with the local Cherokee and other tribes after a series of burnings and killings by marauders in the colonies.

He’s in charge of gathering muskets to arm the indigenous people. No one knows he would eventually betray the Crown and fight for the American Revolution to save his own time-traveling family.

Claire is abducted and brutalized by the bandits who have been ravaging the colonies. When Jamie and his gang track her down, the bandits are slaughtered. Claire and Jamie both had flashbacks of their tormentors, especially Jamie’s arch-enemy Jack Randall. Their visions are deep reflections of their history, as well as the terrible effect of violence against them on their minds.

Roger aspires to be a Protestant minister, but he abandons his studies at the last minute to save Brianna, who has been kidnapped by Stephen Bonnet, the pirate who raped her years ago (and whom she believes is the biological father of her son until Claire discovers evidence that Roger is Jem’s biological father). Roger, Jamie, Ian, and Claire, together with Phaedre, Jamie’s aunt’s slave, rescue Brianna from Bonnet’s island refuge.

When Malva, Claire’s medical assistant, falls pregnant, she accuses Jamie of being the father. Claire subsequently discovers Malva in the garden with her neck slashed; she attempts to save the baby, but it dies. Claire is imprisoned in New Bern awaiting trial when a mob accuses Claire and Jamie of murder.

She is invited to the governor’s palace to help both the governor and his pregnant wife. Jamie eludes his captors and delivers Malva’s father, Tom Christie, to the governor. Christie claims he killed Malva because he mistook her for a witch. Malva is Christie’s brother’s daughter, and Allan, Christie’s son, has been rapping Malva for years, resulting in her pregnancy. Even though Allan is the actual killer of Malva, Christie’s sacrifice allows Claire to be liberated and Jamie to be exonerated.

Meanwhile, on the eve of the Revolutionary War, tensions increase. Jamie ultimately comes out in favor of the revolt, leading a large number of Scots into combat and handily beating the Loyalists. Mandy, Brianna, and Roger’s baby are born with a heart abnormality that Claire is unable to correct, so Brianna and Roger acquire additional gemstones and journey back in time with Jem.

Jamie and Claire consider joining them, but at the last minute decide to stay. A tiny phosphorus fire in the Big House kitchen in January 1776 seemed to confirm the newspaper article’s predictions. The mansion, however, is set ablaze by a gang of ruffians led by another time traveler seeking to return to his time in December. Despite Big House’s full devastation, no one is wounded save the robbers, as the newspaper had both the date and the death details wrong. Claire and Jamie return to Scotland, alone and without community backing, in search of Jamie’s printing press. They return to America to continue waging the good fight.