When We Were Orphans Summary

When We Were Orphans Summary 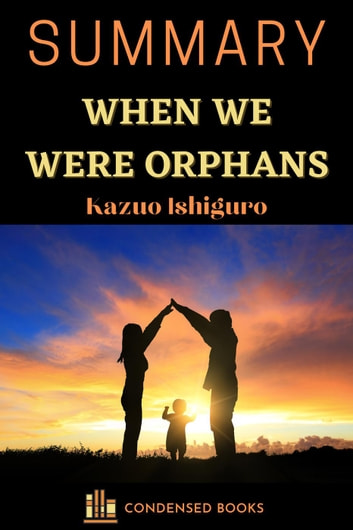 A high-quality summary of Kazuo Ishiguro´s book When We Were Orphans, including chapter details and analysis of the main themes of the original book.

About the original When We Were Orphans book:

When We Were Orphans is a novel by Kazuo Ishiguro, a renowned Japanese-British writer who first published it in the UK in 2000. The historical book, set mostly in 1930s England and Shanghai, is structurally ambitious and has aspects of detective fiction. The story revolves around a man’s childhood memories and current detective work in pursuit of his missing parents, while also giving a broad picture of social structures in China and the United Kingdom during the first half of the twentieth century. In the United Kingdom, the novel was shortlisted for the prestigious Booker Prize.

Kazuo Ishiguro (1954-) is a prominent English-language author who was awarded the Nobel Prize for Literature in 2017. He has eight books and countless short pieces to his credit. He was born in Nagasaki, Japan, to Japanese parents, and migrated to the United Kingdom at the age of five. Memory, social class, history, political intrigue, and philosophy are all themes in his writing. He has also received the Booker Prize and the Golden Plaque from the American Academy of Achievement, as well as been knighted by Queen Elizabeth II for his services to writing.

The Faber and Faber version of the novel used for this study guide was published in the United Kingdom in 2001.

When We Were Orphans Plot

In 1930s England, Christopher Banks is a young investigator who is steadily gaining a name. In a flashback, we discover that he grew up in the International Settlement in Shanghai. His father works for a well-known European firm that handles opium imports into China. His mother is a vocal opponent of the opium trade.

When Banks is nine years old, both of his parents vanish, and her mother’s business partner, Uncle Philip, sends the kid to England for schooling. Christopher says goodbye to his only buddy, a Japanese youngster named Akira, and begins a new life in a strange nation.

He meets Sarah Hemmings, an orphan like him who aspires to marry a man who can transform the world, in the present. She marries Sir Cecil Medhurst, a considerably older man who claims to assist negotiate peace in China during the Second Sino-Japanese War, but fails and falls victim to drinking and gambling.

Banks returns to Shanghai, intent on solving the mystery behind his parents’ disappearance. He meets Grayson, Head of Protocol, and MacDonald, who he assumes is a British Secret Service operative. Both men are unhelpful to Banks’ research and refuse to see the Yellow Snake, a prominent traitor among China’s communist rebels who, according to Banks, may aid his mission.

Sarah urges Banks to elope to Macao with her and start a new life with her. He accepts, but a hint to his parents’ likely location diverts his attention; it’s a house in the heart of a warzone. Banks abandons Sarah and start on a nightmare odyssey through the Shanghai slums’ ruined warrens, where he meets a Japanese soldier whom he believes is the adult Akira.

He discovers his parents’ residence, but they are nowhere to be found. Banks finds that Grayson is a Secret Service agent after returning to the British embassy, and he sets up a meeting with the Yellow Snake, who turns out to be Uncle Philip.

Banks’ father was never abducted, according to Uncle Phillip, but he did leave the family for his mistress and died of typhoid in Singapore. His mother insulted Wang Ku, a Chinese warlord Philip was wooing to assist in the fight against opium smuggling. Wang Ku kidnapped Banks’ mother and tortured her into obedience as his concubine.

Banks learns of his mother’s location twenty years later: she is in a Hong Kong facility, and she does not recognize her son when he visits with his adoptive protégée, Jennifer, but she remembers him as a youngster, and Banks realizes she still loves and wants to protect that child. After learning of Sarah’s death in Malaya, Banks accepts a life devoid of adventure and intrigue.