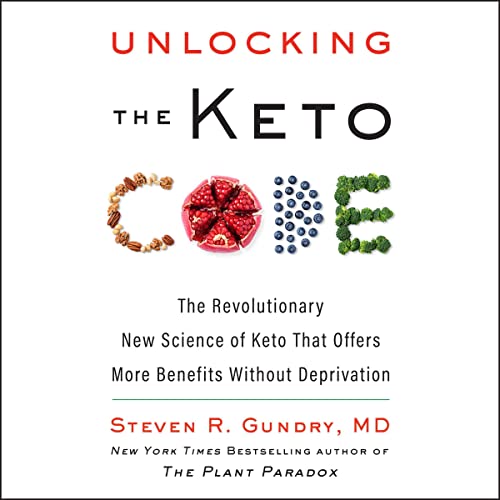 Unlocking the Keto Code Audiobook 🎧 The New Science of Keto

This revolutionary take on the keto diet debunks common myths and shows listeners how to reap the benefits of keto with less restriction, from the author of the New York Times best-selling Plant Paradox series.
Dr. Steven Gundry, like many other doctors and nutritionists, has long advocated for the ketogenic diet, which involves severely limiting carbohydrate intake to force the body to burn fat for energy. Dr. Gundry believed that his patients’ efforts to adhere to the difficult ketosis diet were worthwhile because it provides a number of health benefits, including weight loss, reduced risk of disease, and increased energy. That is until his research revealed an astonishing fact: we have completely misunderstood keto.

In Unlocking the Keto Code, Dr. Gundry reveals the molecular mechanism underlying the success of keto diets: a cellular process known as «mitochondrial uncoupling.» It turns out that ketones aren’t the magical fuel source that they’ve been portrayed as; in fact, the body can’t function solely on ketones and lipids. In the long run, a very low carbohydrate diet can cause muscular atrophy and poor cognitive function.

You don’t need to eliminate all carbs to reap the benefits of ketosis; all you need is enough ketones and other plant compounds called polyphenols in your body to «unlock» the process of mitochondrial uncoupling. This book is enlightening, empowering, and extremely useful. Dr. Gundry discusses how listeners can jumpstart this process by eating plant-based foods (carbs are generally off-limits on a keto diet!) and consuming ketone-producing foods like goat and sheep milk products, as well as following a scheduled eating pattern. You’ll also discover the true reason why superfoods, such as apple cider vinegar, work so well, and it’s not what you think!

This book is for anyone who has tried and failed the keto diet, vegetarians and vegans who want to go keto, and anyone who wants to lose weight and improve their health while eating a variety of foods. With meal plans, tips, and brand-new recipes, Unlocking the Keto Code makes going keto for the first time easy and enjoyable.

Why ketogenic diets, though challenging to maintain, are so beneficial to well-being? In my first book the plant paradox, i even put forth my own keto-based intensive care program to help people boost mitochondrial function and improve their overall health in the process. It’S the diet. I’Ve been prescribing to my own patients for the past 22 years. There’S only one problem: ketones are not the miraculous cellular fuel that so many of us thought they were.

We now understand they actually aren’t a good fuel source at all. In fact, the entire theory of how ketones improve health is just plain wrong. That’S not to say ketones aren’t important as i’ll explain in the following chapters. These little molecules play a vital role in helping to ease the burden of your mitochondria, your cells, energy factories in ways that can help prevent, as well as reverse, not only weight gain but also diseases of aging, even more important. Once you learn what ketones really do?

You’Ll realize you don’t have to force yourself to eat a heavy high-fat and, frankly, boring diet to harness their power. A tale of two patients janet a 43 year old mother of two came to my palm springs clinic for help. After her family physician diagnosed her as pre-diabetic, her resting blood, sugar or glucose level was higher than the normal range, but not yet high enough to be considered full-blown type 2 diabetes. Her doctor wanted to start her on a statin drug for high cholesterol and revamp her diet in order to right the ship, so to speak that brought her to my door. After running my standard battery of tests, i agreed with her doctor that she had metabolic syndrome a cluster of health issues that can increase one’s risk of cardiovascular disease and diabetes, as well as insulin resistance, a condition where your body actually resists the insulin your pancreas produces.

So your cells can’t get the vital glucose they need to thrive as you’ll. Soon learn janet, like nearly all americans was metabolically. Inflexible sounds bad right. It is. The tests also showed signs of excess inflammation, but i didn’t see a reason to start her on the statin.

I thought we could manage her issues with diet and i suggested she try my plant paradox: keto intensive care program. Three months later, janet came back into the office for new lab tests. We found that she had lost 15 pounds and her blood work showed. She was no longer pre-diabetic, shockingly, at least to her primary care doctor, but certainly not to me. Her cholesterol had also improved to the point where, according to her regular doc, a statin was no longer necessary.

Needless to say, janet was delighted she felt more energized and was sleeping better and like many of my patients, she was motivated to keep going. We eased up on the high amount of good fats. I had recommended she eat to promote ketosis and scheduled a follow-up appointment when janet returned. Six months later, she was down another 20 pounds and her lab work looked spectacular. Her blood tests showed no signs of inflammation and her hemoglobin a1c hba1c.

A measure of how well-controlled your blood sugar is was down to 4.9. Anything under a 5, in my opinion, is worthy of a literal gold star, in short janet’s case, presented as a perfect keto success story, except for one thing, janet was not happy. She, like me, was pleased with her test results, but despite the fact that she was eating like a horse concerned, friends were commenting that she looked a little too thin, even as she added different foods back into her diet, her weight continued to fall. She told me she was ready to stop losing pounds and stabilize.

Let me tell you that janet is not the only person who has experienced this phenomenon. Many of my patients have gotten to a similar point with my eating plan, where they actually had trouble, keeping their weight stable, given common wisdom regarding ketogenic diets of why ketogenic diets, though challenging to maintain, are so beneficial to well-being. In my first book the plant paradox, I even put forth my own keto-based intensive care program to help people boost my…