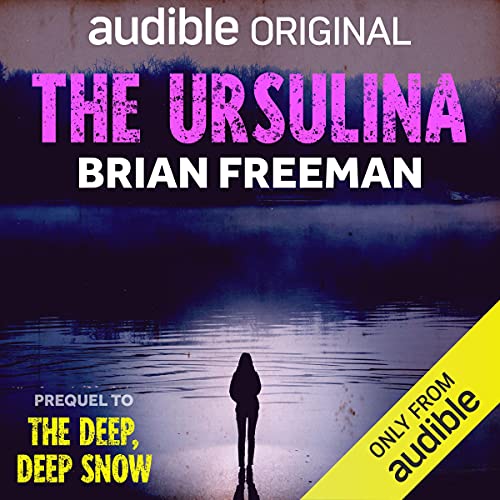 Brian Freeman tells the story of Rebecca Colder, a young sheriff’s deputy who faces the most difficult decision a mother can make in this gripping sequel to his Edgar Award-nominated mystery, The Deep, Deep Snow.
I’m sure you’ll never forgive me for what I did. I’m sure you’ve asked yourself that question many times over the years.

Why? When I did it, what was I thinking?

Sweetheart, this is the answer.

I was only 26 years old when the monster returned to Black Wolf County. The answers you seek start around Christmas time that year. However, you must delve even deeper into my past if you truly want to comprehend everything that has happened to me – to us.

I first met Ursulina in person many years ago.

Let’s get started there.

When you’re, the only woman deputy in the county, sheriff’s department, and it’s Christmas eve who do you think is the lucky one who pulls the overnight shift. Yes, it was me the snow fell in huge flakes promising us a white Christmas at the end of a brown December around 10 o’clock. That Monday evening, I was alone in my cruiser on the back roads of black wolf county singing along to a cassette of mitch miller carols, that my father had sent me from a truck stop somewhere in Wyoming. My brother was away in the oil fields of Texas. I was lonely and fighting a cold and trying to take my mind off the fact that my life was falling apart.

This was 1984, I’m sure you can do the math. You were still almost a year away from being born. You might think the holiday would make for a quiet night on patrol, but you’d be wrong. Christmas does weird things to people. My first call was to deal with Darius Steadman, who was moonwalking to Michael Jackson on the boom box.

In the parking lot of the 126 bar, Mr. Steadman was wearing a Santa hat and only a Santa hat. The temperature was 7 degrees outside and body parts froze. Pretty quickly in that kind of weather, so I turned on the siren and went screaming toward the 126 to make sure that Mr Stedman’s, various appendages didn’t start snapping off. It’s not like. He was a regular in the county, drunk tank.

We had plenty of those. No, he was 43 years old, a solid citizen, and my former high school science teacher. I liked him. However: he’d lost his wife to a heart condition over the summer and the holidays have a way of bringing those things roaring back, particularly when alcohol is involved. When I got to the 126, a crowd of bar-goers was cheering as Mr. Stedman danced to Billie Jean Ricky.

My husband of four years was among them, but we ignored each other. Like strangers, I broke up the party wrapped Mr. Stedman, in a blanket, and took him back to his house to thaw him out and sober him up. He spent the next half hour sobbing to me about his wife over coffee. It made me think how nice it must be to love someone so deeply that it hurts that much to lose them. I never experienced emotion like that, and I wouldn’t until the following year, until you sweetheart, I left when Mr. Steadman finally fell asleep on his sofa.

I had to drive by the 126 on my way back to the station, so I decided to stop to talk to Ricky. I was sure he was still at the bar. He was always there drinking up my county salary and flirting with the 18-year-old waitresses. The 126 was our local dirty dive. It took its name from its location on Highway 126 about 10 miles outside the county seat, a town called random.

During the summers they had strip nights and wet t-shirt contests, dart games turned into knives. Fights of cocaine was snorted in the bathroom, and yet almost everyone in the county from parents to preachers came in for pizza and drinks at the 126 several times a week, because there was nowhere else to go. Sundays were typically movie nights at the bar and that always drew a crowd. Yesterday, they’d shown trading places which Ricky didn’t want to miss because of Jamie Lee Curtis and her boobs I’d used my cold as an excuse to skip it, but Ricky and I had also had a big fight before he went off to see the movie I’d lost. I cool and said things I never meant to say out loud, like using the d-word divorce.

For the first time, it had been almost two years since Ricky got fired from the mine for assaulting his supervisor, with no unemployment. We were barely scraping by and we’d only made the December mortgage payment because my dad gave me two hundred dollars January was coming and the mortgage was due again and Ricky was no closer to finding work. However, the fight was less about him and less about money than it was about me. I was struggling with big things and I was the mistakes. I made, what I needed to do to reclaim my life more and more.

I was thinking about a future without Ricky, but the time to say so wasn’t in the midst of an argument. While we were both drunk and angry that Monday night, with it being Christmas eve and all I decided to stop at the bar and see if we could make peace at least for the holidays, when you’re the only woman deputy in the county, sheriff’s department – and It’s Christmas eve who do you think, is the lucky one who pulls the overnight shift? Yes, it was me the snow fell in huge flakes promising us a white Christmas at the end of…