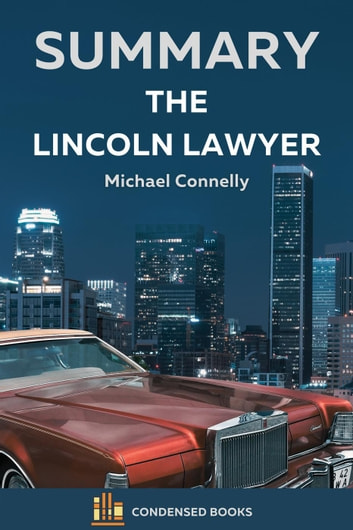 A high-quality summary of Michael Connelly´s book The Lincoln Lawyer, including chapter details and analysis of the main themes of the original book.

About the original The Lincoln Lawyer book:

Michael Connelly is a bestselling novelist in the New York Times. In 2006, his legal thriller The Lincoln Lawyer received the Shamus Award and the Macavity Award. After then, the book was successfully made into a film. Connelly is widely recognized as one of the top mystery authors in the United States.

Michael «Mick» Haller is a Los Angeles-based criminal defense lawyer. He works out of his Lincoln Town Car with his driver, Earl, for the most part. Mick is a quick-witted, astute lawyer with a difficult personal life. Mick, who is used to representing criminals, makes his living by defending the guilty and assisting them in reaching plea agreements with the prosecution.

Mick is taken aback when he receives a personal request from a wealthy client, Louis Roulet, who has been accused of attempted rape. Mick’s surprise is compounded when he learns that his ex-wife, Maggie, has been assigned to the prosecution in the same case. She is sure that his client is guilty, and charges him with attempted murder. Mick begins to feel that Louis Roulet, a well-to-do white man with no criminal record, could be his first truly innocent client.

Louis Roulet believes he was set up by a sex prostitute and one of her regulars because of his income. Roulet claims he was enticed to Reggie Campo’s flat with the expectation of having sex. Reggie, on the other hand, punched Roulet in the head when he came, knocking Roulet unconscious. When he was being held down by two men, he regained consciousness. Reggie was crying and badly battered as she told the cops that Louis had assaulted her and attempted to rape and murder her.

Although there is evidence that Roulet is telling the truth, Raul Levin, the investigator, discovers significant flaws in Roulet’s story: Roulet was well aware that Reggie Campo was a sex worker, and he arrived at her apartment with a knife (the murder weapon).

As the trial progresses, Mick notices parallels between this case and that of his previous client, Jesus Menendez. A woman named Martha Renteria was charged with a crime strikingly similar to Jesus’. She was raped and murdered with a knife in her own home. As Mick and Levin come closer to the truth about Roulet, they learn that Jesus Menendez has always been innocent.

Jesus is incarcerated at San Quentin for a crime committed by Louis Roulet. They conclude Roulet picked Mick as his attorney to protect himself: the attorney-client privilege protects anything Mick knows about Roulet. Mick is unable to offer this confession to the police, even if Roulet admits to being guilty of both the crime for which he is charged as well as the murder of Martha Renteria.

While Mick defends Roulet in court, Levin continues to investigate him. Levin leaves Mick a voicemail indicating that he has discovered the essential proof needed to put the crime on Roulet and free Jesus. Levin is assassinated a short time later. Mick’s gun, which was used to shoot Levin, is missing from his residence. Mick believes Roulet took the gun and used it to frame Mick by murdering Levin.

Mick decides that the trial is the greatest way to catch Roulet. He makes a strong case to persuade the jury that Roulet is innocent, all while devising a plot: Mick buys a prosecution witness (a jailhouse informant) to testify that Roulet boasted of killing a girl with a snake tattoo while incarcerated. When the witness testifies in this manner, the investigators in the courtroom immediately recognize Roulet as the murderer of Martha Renteria.

Mick’s plot works, and Roulet is caught outside the courtroom for the murder of Martha Renteria after being acquitted for the assault on Reggie Campo. As Mick is handcuffed, Roulet threatens Mick, vowing to come for Mick’s ex-wife and daughter. Roulet has no idea that this is exactly what the investigators want him to do. Mick has no idea that he is being used as bait by the cops. Roulet is detained by the police for a few hours before being freed and heading for Mick’s ex-house. wife’s Roulet’s mother, Mary Windsor, rushes in and shoots Mick in the stomach just as Mick is loading a rifle and heading for his car.

Mick notices that she is clutching his stolen gun and tells him that she has to murder him for what he did to Roulet. He realizes she was the one who assassinated Levin. Mick fires his concealed gun and kills her before she can shoot him a second time.

The cops who were following Roulet and his mother saw Mick fire in self-defense, therefore they can confirm that he did so. Roulet is apprehended and charged with the murder of Martha Renteria, the assault on Reggie Campo, and yet another rape and murder that Mick was unaware of. Jesus Menendez is released after Roulet is condemned to live in prison.

Mick’s gunshot wound will require numerous operations, and the knowledge that Jesus spent so much time in prison for a crime he didn’t commit will torment Mick for the rest of his life. However, he continues to practice law as a defense attorney, intending to represent the world’s underdogs.