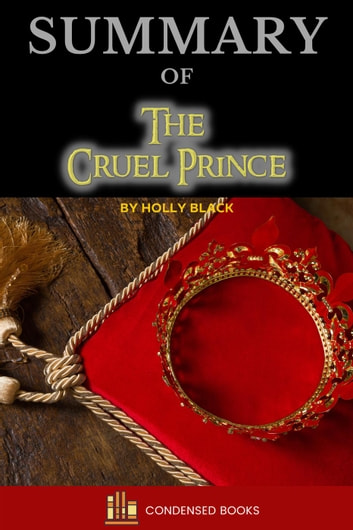 A high-quality summary of Holly Black´s book The Cruel Prince including chapter details and analysis of the main themes of the original book.

About the original The Cruel Prince book:

When a mystery man named Madoc shows up at the door of their house in the American suburbs, Jude and her identical twin sister Taryn are seven, and their elder sister Vivi is nine. Their mother has a stressful meeting with Madoc, who claims to be Vivi’s father as well as a faerie from a mystical place known as Faerie. The girls’ mother, who was previously married to Madoc, fled Faerie with the twins’ father. Now, when Madoc approaches her in her suburban house, he murders her and her husband in retaliation for the shame they gave him years before. He returns to Faerie with all three daughters.

Jude grows up in Faerie, and the narrative picks up when she is seventeen years old. Madoc marries Oriana, with whom he had a son named Oak. Jude and Taryn go to lessons with their peers from the faerie King’s court family. Jude and Taryn are harassed in Faerie by one of the King’s six offspring, the pompous prince Cardan, and his posse. Jude has spent her childhood learning battle and military strategy from Madoc, and she aspires to be a knight in one of the courts.

The Cruel Prince Summary is written by Condensed Books.