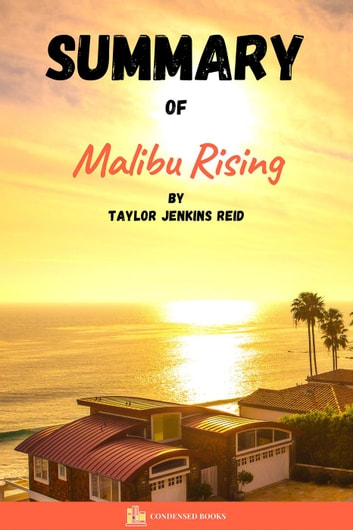 Extensive analysis of Taylor Jenkins Reid´s book Malibu Rising, including detailed summaries of the chapters of the original book.

The prologue begins with a historic fire in Malibu. On August 27, 1983, the Malibu fire broke out on the day of Nina Riva’s annual summer celebration. It is still unknown who started the fire.

Nina Riva wakes up alone at 7:00 a.m. m. Her husband recently left her after an affair and she is terrified that others will ask about him at the party that night. Nina has two brothers: Jay, a professional surfer, and Hud, a photographer specializing in surfing. Jay has graced the covers of surf publications three times thanks to Hud’s work; Hud sleeps with Jay’s ex-girlfriend. Her sister Kit, who is in her third year of college, is her younger sister.

The story takes place in 1956. June and Mick Riva, the brothers’ parents, met in Malibu when Mick was just starting as a musician. Little by little, he was gaining prominence. While Mick was on tour, a woman knocked on June’s door and told her that Mick had fathered her son Hud, whom she leaves with June. Mick forgave June for her adultery but eventually left her to marry someone else. Mick went back to June after her first marriage ended in divorce. They remarried soon after and had Kit. Mick, on the other hand, was soon gone for good. June’s children took care of themselves while she drank more and more. Mick didn’t go near his children after June drowned. Nina took on the role of tutor to her siblings, dropped out of school, and took over the family restaurant. She was eventually found surfing and she became a professional model, earning enough money to support her siblings. Brandon Randall, a professional tennis player, married her in 1982.

In the present, Jay seeks out Lara, a lady he recently slept with and is comforted by her assurance that she would be fine despite her newly discovered heart problem. He has simply told him about her, so he confirms that she will attend the party. At the party, Kit hopes to kiss a boy for the first time. Hud is undecided on how he will inform Jay about his connection to Ashley. Nina and her brothers meet for lunch at a restaurant and then go surfing together.

Brandon checks in shortly before 7:00 p.m. and informs Nina that he wishes to return home. Brandon urges Nina to return to him, publicly expressing her love for him and forcing her to say «yes». Nina notices that Ashley and Hud are sleeping together at the party and Ashley informs Hud that she is pregnant. Nina also meets Casey, a young woman who is also Mick’s daughter, and she walks by the party.

Kit kisses Ricky Esposito and immediately understands that she doesn’t like kissing men. Ricky is the first person she comes out to.

Jay confesses his love for Lara in Hud’s truck. They start having sex when Jay notices the nude photos of Ashley in the glove compartment. He then reiterates his love for Lara, who does not share his feelings. Enraged, Jay seeks out Hud, who chooses to reveal the truth to Jay: Hud is going to become a father.

Nina realizes that she doesn’t have to put up with everything that comes her way when Brandon’s mistress arrives. Nina tells Brandon to go away.

When Mick arrives, she finds Jay and Hud fighting and separates them. She talks with her children. Mick wants to rejoin his life. Everyone is suspicious and Nina claims that Mick hasn’t changed much. Her brothers are taken aback by his frankness. Even if Mick feels sorry for what he has done, Nina doesn’t value her love. Mick admits that he doesn’t remember sleeping with Casey’s mom. He also says that he is not capable of being a father, which irritates Nina because she couldn’t decide if she was capable when June died. He just did what he had to do for his family, even though he would have preferred to be surfing in Portugal. Mick decides to abandon his children. He returns home and deals with the cops who were summoned when the party got out of control.

Casey is accepted as a member of the family, and the others pressure Nina to visit Portugal. She agrees to leave because she realizes that they can fend for themselves.