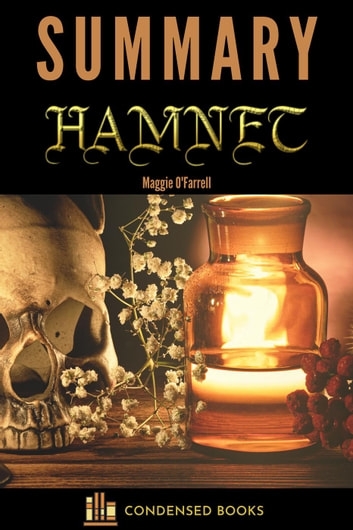 A high-quality summary of Maggie O’Farrell´s book Hamnet, including chapter details and analysis of the main themes of the original book.

About the original Hamnet book:

Maggie O’Farrell, an Irish-British novelist, wrote Hamnet, a historical fiction novel, in 2020. It fictionalizes William Shakespeare’s family’s existence between the death of his son Hamnet in 1596 and the composition of Hamlet about 1600. Hamnet was named the winner of the Women’s Prize for Fiction in 2020, a major literary prize in the United Kingdom.

The tale begins with Hamnet, eleven, learning that his twin sister, Judith, is sick with a fever and buboes, or egg-shaped bulges beneath her skin. He looks for the doctor and his mother Agnes, who is a healer, but they are both gone. While his father, a playwright, is abroad in London, his grandparents are too preoccupied.

When Agnes and the doctor arrive, the doctor believes Judith will pass away. Agnes, a more effective healer than the physician, tries all of the medicines she knows to help her daughter. The family is ignorant that Judith’s illness was caused by a remote encounter between a Venetian glass dealer and a flea that fell from a monkey’s back in Alexandria, Egypt.

Hamnet is displaying signs of sickness as well, but no one notices. Hamnet forms a contract with death because he can’t take the notion of his twin dying while he lives. He changes into Judith’s clothing and promises to be Death’s next victim. When Agnes awakens, she discovers that the dying twin is Hamnet, not Judith. She won’t be able to help him at all.

The meeting of Hamnet’s parents opens the novel’s second storyline. His father is a Latin instructor and the son of a shady glovemaker, while his mother is the daughter of a deceased yeoman and a healer who lives in the woods. Agnes’ mother is deceased by the time she meets the Latin instructor, and she is working for her stepmother Joan, who is terrified by Agnes’ psychic and healing skills.

When Joan protests the Latin tutor’s marriage to Agnes, the two have sex. Their relationship culminates in a pregnancy and a hasty marriage, which John, the Latin tutor’s father, prefers since it reduces his obligation to the yeoman who died. Agnes moves to Stratford to live with her Latin tutor and his family. She gives birth to her first child, Susanna, in the wilderness, following the advice of her deceased mother. Agnes develops a reputation for her healing abilities over time.

When Agnes is expecting her second child, however, she is worried about her inability to predict the kid’s gender as well as her husband’s restlessness and despair. She has a feeling he needs to leave the confines of Stratford and travel to London. Agnes had intended to accompany him there once she gave birth. Agnes is terrified when she gives birth to twins, Hamnet and Judith since she has a psychic sensation that she was only intended to have two children, not three.

She decides to defy fate and safeguard the lives of all three of her children. Agnes believes that London will kill Judith and that they should stay in Stratford since she is a delicate youngster. Following that, the children grow apart from their father, who becomes a renowned writer.

The novel’s last section depicts the aftermath of Hamnet’s death. While Agnes grieves over her son at home, her husband feels compelled to seek solace in London. Even though he still travels home on occasion and purchases a larger home for his wife and remaining girls, he becomes increasingly estranged from them and unfaithful to Agnes.

Agnes is shocked a few years later when she learns that he created a play with their dead son’s name on it. When she insists on seeing the performance, she discovers that it is her husband’s way of reviving Hamnet and comforting himself over the death of a child.

Sign up to receive the latest news in your email