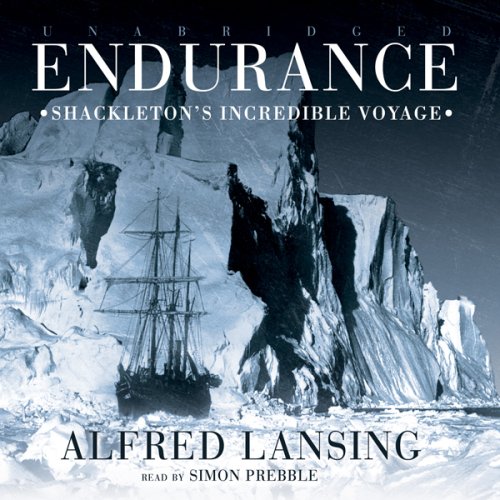 This is a new edition of the thrilling account of one of history’s most incredible feats of exploration and human bravery.
In August of 1914, the British ship Endurance set sail for the South Atlantic. In October 1915, the ship became stranded and smashed in the ice, still half a continent away from its intended base. Sir Ernest Shackleton and his men were castaways for five months, drifting on ice packs in one of the world’s most dangerous places.
Lansing describes how the men survived a 1,000-mile journey in an open boat across the world’s most dangerous ocean and an overland journey through treacherous glaciers and mountains. The book depicts a horrific story, but in the end, it is these men’s nobility and unwavering spirit that shine through.

Last three days at the pumps farther forward the dog team drivers attached a large piece of canvas to the port rail and made it into a sort of chute down to the ice alongside the ship they took the 49 huskies from their kennels and slid each one down to the other men waiting below ordinarily any activity of this sort would have driven the dogs mad with excitement but somehow they seemed to sense that something very extraordinary was going on not one fight broke out among them and not a single dog attempted to break away it was perhaps the attitude of the men they worked with a deliberate urgency hardly speaking to one another there was no display of alarm however in fact apart from the movement of the ice and the sounds from the ship the scene was one of relative calm the temperature was eight and a half degrees below zero and a light southerly wind was blowing overhead the twilight sky was clear but somewhere far away to the south a gale was blowing toward them though it probably wouldn’t reach their position for at least two days its approach was suggested by the movement of the ice which stretched as far as the eye could see and for hundreds of miles beyond that so immense was the pack and so tight that though the gale had not yet reached them the distant pressure of its winds was already crushing the flows together the whole surface of the ice was a chaos of movement it looked like an enormous jigsaw puzzle the pieces stretching away to infinity and being shoved and crunched together by some invisible but irresistible force the impression of its titanic power was heightened by the unhurried deliberateness of the motion wherever two thick flows came together the edges butted and ground against one another for a time then when neither of them showed signs of yielding they rose slowly and often quiveringly driven by the implacable power behind them sometimes they would stop abruptly as the unseen force affecting the ice appeared mysteriously to lose interest more frequently though the two flows often ten feet thick or more would continue to rise tenting up until one or both of them broke and toppled over creating a pressure ridge there were sounds of the pack in movement the basic noises the grunting and whining of the flows along with an occasional thud as a heavy block collapsed but in addition the pack under compression seemed to have an almost limitless repertoire of other sounds many of which seemed strangely unrelated to the noise of ice undergoing pressure sometimes there was a sound like a gigantic train with squeaky axles being shunted roughly about with a great deal of bumping and clattering at the same time a huge ship’s whistle blew mingling with the crowing of roosters the roar of a distant surf the soft throb of an engine far away and the moaning cries of an old woman in the rare periods of calm when the movement of the pact subsided for a moment the muffled rolling of drums drifted across the air in this universe of ice nowhere was the movement greater or the pressure more intense than in the flows that were attacking the ship nor could her position have been worse one flow was jammed solidly against her starboard bow and another held her on the same side aft a third flow drove squarely in on her port beam opposite thus the ice was working to break her in half directly amidships on several occasions she bowed to starboard along her entire length forward where the worst of the onslaught was concentrated the ice was inundating her it piled higher and higher against her boughs as she repelled each new wave until gradually it mounted to a bulwarks then crashed across the deck overwhelming her with a crushing load that pushed her head down even deeper thus held she was even more at the mercy of the flows driving against her flanks the ship reacted to each fresh wave of pressure in a different way sometimes she simply quivered briefly as a human being might wince if seized by a single stabbing pain other times she wretched in a series of convulsive jerks accompanied by anguished outcries on these occasions her three masts whipped violently back and forth as the rigging tightened like heart strings but most agonizing for the men were the times when she seemed a huge creature suffocating and gasping for breath her sides heaving against the strangling pressure more than any other single impression in those final hours all the men were struck almost to the point of horror by the way the ship behaved like a giant beast in its death agonies last three days at the pumps farther forward the dog team drivers had attached a large piece of canvas to the port rail and made it into a sort of chute down to the ice alongside the ship they took the 49 huskies from their kennels and slid.