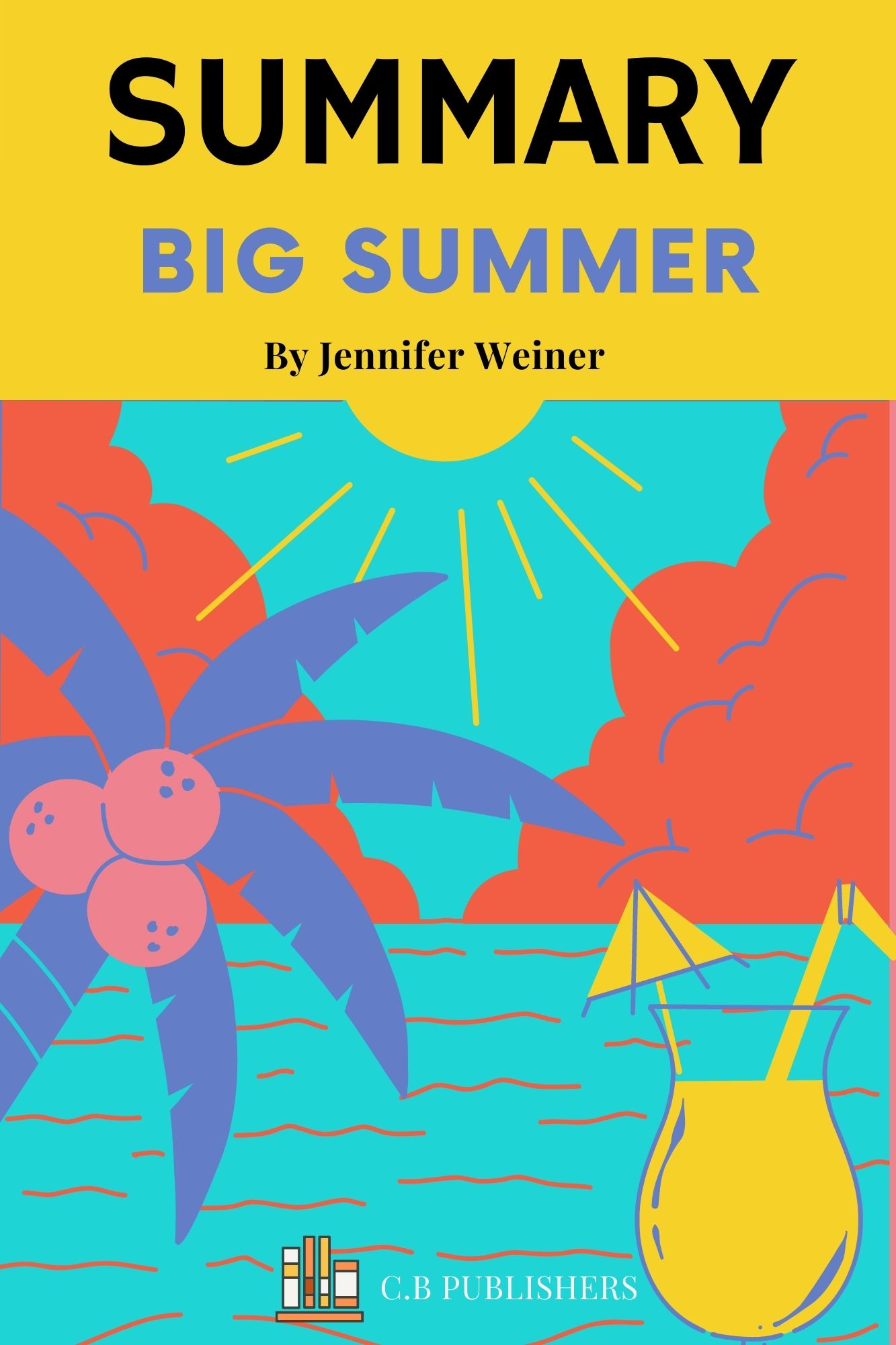 Chapter by Chapter Summary and analysis of Jennifer Weiner´s book Big Summer, including detailed summaries of the chapters of the original book.

Daphne is a social media influencer and part-time nanny. Her blog and Instagram account advocate for body positivity and plus-size fashion. Despite her outward confidence, Daphne suffers from low self-esteem. She longs to be loved and respected for her heart and talent, but she is constantly let down by men who can’t get past her weight. Her childhood friendship with a woman named Drue is also haunting her.

Drue Cavanaugh is the heir to a family fortune in Manhattan. She embodies every stereotype of American beauty, and her wealth and family name enable her to view the world as her playground. She employs girls who adore her to do the work she would rather not do. Drue, on the other hand, is lonely and receives little love and support from her family.

Her father, Robert, is well-known for his Cape Cod summer affairs, which result in children that Drue never meets. Drue and Daphne first meet in sixth grade, when Daphne’s parents assist her in obtaining a scholarship to the prestigious Lathrop school. Despite her friend Darshi’s warnings, Daphne falls under Drue’s spell right away.

Daphne and Drue have been using each other in an envious friendship for years. Daphne is eager to please Drue because being with Drue makes her feel special. Drue manipulates Daphne while also envying her home life. Their friendship is shattered when the girls go out at the age of 19, and Drue sets Daphne up with a handsome and wealthy friend. Daphne learns that Drue arranges the date because she feels sorry for Daphne and that the man is uninterested in her.

Daphne stops speaking to Drue, and they don’t speak for years. Drue, on the other hand, develops a social media career. Drue’s fortune and connections allow her to launch an influencer career, whereas Daphne’s social media career is limited to body positivity subcultures. Daphne eventually moves in with Darshi and spends her twenties learning to love her body.

Daphne is in a good place when Drue reappears in her life. Daphne, a plus-size model, was recently hired by Leela, a fashion designer. Drue locates Daphne and invites her to be her maid of honor at her wedding. Drue is well-known and wealthy, but she has few friends.

Daphne agrees to attend the wedding despite her past traumas and Darshi’s warnings when Drue offers her money. Photo opportunities at Drue’s wedding will almost certainly increase exposure for Leela’s fashion brand. Drue and Daphne reach an agreement, and Daphne travels to Cape Cod for the year’s socialite wedding.

The night before the wedding, the Cavanaughs throw an extravagant party. Daphne strikes up a conversation with a handsome man named Nick who claims to have known Drue as a child at sailing camp, which seems out of place at such a fancy event. Daphne overhears Drue and her father arguing about money, and she comforts Drue after the party.

Daphne encounters a man who lurks around the rooms and quickly disappears on her way out of Drue’s room. Daphne spends the night with Nick and awakens to find Drue dead in the hot tub attached to Daphne’s room. Nick isn’t to be found.

Detective McMichaels questions Daphne. He reveals that the wedding was meticulously planned, with companies advertising their products on Drue and her groom’s social media platforms. Darshi travels to Cape Cod from a scientific conference in Boston to assist Daphne. Emma Vincent, a caterer, is arrested by Detective McMichaels for the murder of Drue Cavanaugh. Darshi and Daphne discover Nick in another room. He denies murdering Drue and claims he left early in the morning because he was afraid someone would find him and realize he hadn’t been invited to the wedding.

Nick grew up in the house that had been rented for the wedding. Nick’s mother had owned the house but had been murdered when he was a child. Nick was adopted by his aunt and her husband, and when he learned that Drue’s wedding would be held nearby, he decided to crash so he could return to his childhood home.

Daphne, Darshi, and Nick locate Emma’s mother, who quickly recognizes Nick. She explains that Emma and Nick are both the children of Robert Cavanaugh. Both of their mothers had brief relationships with Robert many years ago.

Drue’s mother, Lily, is hospitalized due to a nervous breakdown. Daphne visits her. She overhears a conversation between Stuart and a woman he proposed to on a dating show on which he had appeared. When Daphne confronts him, Stuart admits that the wedding was a set-up.

Drue needed to marry to receive her trust fund sooner, so she and Stuart agreed to marry for the money and the publicity. The plan had been to have a wedding that would have garnered them even more attention, followed by a divorce a few years later.

Emma is eventually freed after the cause of death is determined to be poison. Daphne notices the mysterious man from the deck at the Lathrop school’s Drue memorial but is stopped by Detective McMichaels before she can speak to him.

Detective McMichaels is on the hunt for Drue’s murderer. He reveals that Drue’s death would have benefited many people, including Daphne. Drue had changed her will six months before her wedding to leave her millions to charity, Daphne, and all of Robert’s children (including those born out of wedlock). Daphne is determined to find Drue’s murderer now that suspicion has been recast on her.

On Drue’s social media, Daphne, Darshi, and Nick discover the mystery man from the deck. Aditya is a data scientist whose physical appearance and lack of wealth make him unsuitable as a boyfriend for Drue.

They go to Connecticut to confront him. Aditya is a nice man who admits that he and Drue were in love. When Drue met Aditya, she had been working hard to give back to the community, and she fell in love with him partly because she knew he didn’t like her solely for her family’s money.

Drue eventually ended her relationship with Aditya because she succumbed to the pressure to marry someone like Stuart. Aditya suggests that someone who had been wronged by Drue might have murdered her.

Daphne looks through old photographs of Drue’s life, hoping to find someone who despised Drue enough to murder her. Daphne realizes that Leela is a girl from Drue’s high school who took the SATs for Drue and was expelled. After tracking Daphne’s movements on social media, Leela confronts her in her apartment.

Leela admits that she hired a man to poison Drue. Leela’s life had been shattered by her expulsion. Her family had stopped communicating with her, all of her college acceptances had been withdrawn, and Leela had even spent time in a psychiatric ward.

Leela changed her appearance and life to become a sophisticated and trendy fashion designer, which would provide her with the connections and resources she needed to get close to Drue. She even hired Daphne even though Daphne and Drue were once friends. Leela reveals her plan to murder Daphne and stage her death as a suicide. Daphne fights back, and Nick arrives just in time to protect her.

Leela has been charged with Drue’s murder. Daphne takes pride in her body, the body that allowed her to fight for her life. She and Nick fall in love and begin to make plans for their future together. Daphne reconciles her feelings toward Drue, whom she now sees as a lonely woman who died without being truly known by anyone except Aditya.