Atlas of the Heart Summary

Atlas of the Heart Summary

Mapping Meaningful Connection and the Language of Human Experience 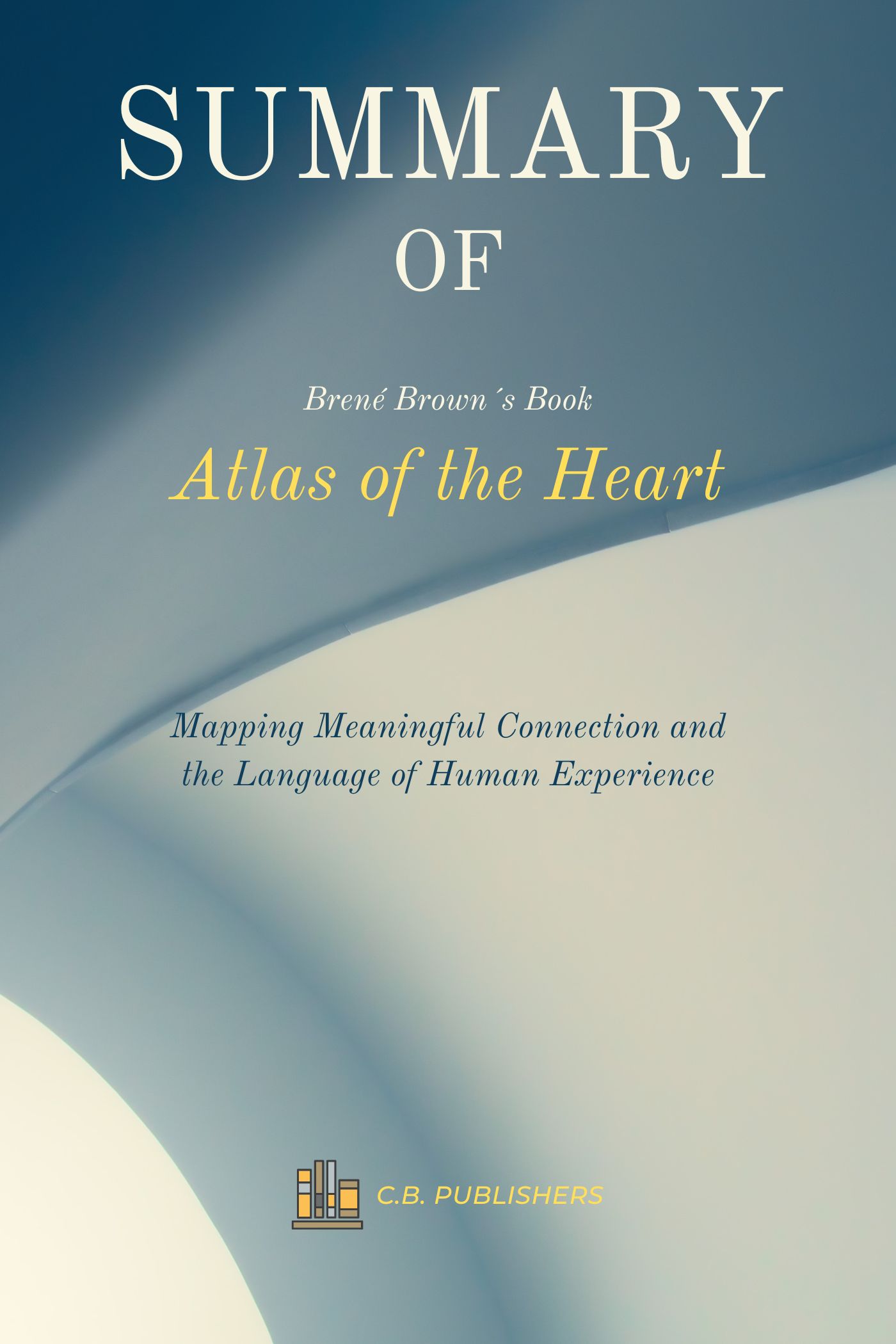 Chapter by Chapter Summary and analysis of Brené Brown´s Book Atlas of the Heart, including detailed summaries of the chapters of the original book.

Atlas of the Heart Book

Atlas of the Heart, a self-help book published by Random House in 2021, is subtitled «Mapping Meaningful Connection and the Language of Human Experience.» Brown identifies and investigates over 80 emotions and experiences gleaned from her work as a grounded theory emotions researcher. She defines each emotion/experience and frequently contrasts it with others, based on her own research and considerable research from others. Brown believes that using nuanced language allows readers to better comprehend the distinction between different emotions and experiences, allowing them to connect with themselves and their stories, as well as the tales and experiences of others.

This is Brown’s first book to be released with considerable artwork/visual aids, with a visual layout comparable to a classic coffee table book. Brown’s purpose with this effort is to make the book’s explanations of the human experience more relevant by providing several examples for the reader to picture.

Brown describes herself as a student of emotions since she was a child in the opening. She learned to read people and forecast what they would do or want from others through observation. This made her feel overwhelmed and frightened since she would rely on the words and acts of others to figure out how to satisfy or belong to them. While Brown no longer believes we should read others to please them, she recognizes the power of emotions and how most people appear to be ignorant of what is driving them. Her purpose in this book, as an emotions researcher, is to provide the reader with vocabulary for what is happening on a biological and biographical level to enable them to belong to themselves and others while making sense of our human experience.

Brown delves into the «Places We Go When Things Don’t Go As Planned» in Chapter 3, which vary from boredom to regret. In Chapters 4-5, she examines what we feel when «It’s Beyond Us» or «Things Aren’t What They Seem.» These two chapters underscore the value of being curious and open to the world rather than withdrawing or lashing out when we discover our limited humanity. «When We’re Hurting» discusses the five painful feelings and distinguishes between debilitating misery and the type of healthy grief that can help develop human ties in Chapter 6.

Human connections are the focus of Chapters 7-10. Brown investigates «Places We Go With Others,» «When We Fall Short,» «When We Seek Connection,» and «When the Heart Is Open.» While the specific emotions range from compassion to shame, insecurity, or betrayal, each of the experiences in this area has something to do with our yearning for human interactions. Brown repeatedly investigates how humans are not designed to be lonely or autonomous, but rather rely on one another to thrive. Chapter 11 examines «Places We Go When Life Is Good,» which varies from pleasant emotions such as tranquillity to more complicated activities such as thankfulness.

Brown describes what happens in «When We Feel Wronged» or «Places We Go to Self-Assess» in Chapters 12-13. Brown concludes with a chapter titled «Cultivating Meaningful Connection.» While this is not a separate chapter, it highlights Brown’s final theory on making meaningful connections based on her discoveries in Atlas of the Heart. Brown discusses why she believes we must first belong to ourselves before we can belong to others. While addressing emotions and walking alongside one another is difficult and demands vulnerability, it is at the heart of the human experience and some of the most important work we can do.

Brown begins by describing her «special ability» of observation as a child. She could sense how people were feeling or how they would react, and she would behave accordingly. She might swim backstroke to evade her swim teacher’s judgment or shelter herself and her siblings from her parents’ fight. While these «top-level observation powers» helped Brown fit in, she believes that «knowing probably just increased my anticipatory anxiety and intolerance for vulnerability.» Brown masked these sensations as a youngster with activities, fun, drugs, and booze. Brown was encouraged to «do her work» of sobriety and face her thoughts, feelings, and experiences after her mother pursued recovery and treatment following her parents’ divorce.

Brown has been formally exploring the relationship between «how we think, feel, and act» for the past 20 years. She has explored shame, vulnerability, courage, and wholeheartedness, among other things. She created a curriculum based on her study fifteen years ago. Brown has questioned hundreds of people about their feelings in her workshops, and the most prevalent emotions named are «happy, sad, and angry». Brown says that these broad concepts demonstrate that to communicate our feelings, we must first create a language for our experience to share it with others.

According to Brown, research demonstrates that a lack of emotional language can impair our ability to comprehend sensory data and the world around us. The advantage of «emotional granularity,» defined by «Harvard psychologist Susan David» as «learning to label emotions with a more nuanced vocabulary,» is that it allows us to «communicate our needs and get the support we need from others.»

The purpose of this book is to investigate «what it means to be human» by detailing 78 emotions discovered through Brown’s research. Brown investigates emotion and experience in tandem since the two are inextricably linked. While emotional researchers debate on the specific quantity and type of emotions, they all agree that they are present in the human experience.

Brown’s study has been consolidated by evaluating responses from the online course she taught from 2013 to 2014. Brown’s team sorted through 550,000 comments, asking two questions: «What are the most common emotions and experiences, and which emotions and experiences do people struggle to name or label?». Brown then asked a focus group of professional therapists to select the most crucial emotions for patients to process. Brown collaborated with other researchers, college interns, and others over three years to identify which feelings and experiences to investigate. Brown chose the mapmaking metaphor for Atlas of the Heart because maps help us determine where we are, where we came from, and where we are heading. The purpose of this book is to do that on an emotional and experiential level, allowing for self-awareness and subsequently connection with others.

Brené Brown holds the Huffington Foundation-Brené Brown Endowed Chair at the Graduate College of Social Work at the University of Houston, where she is a research professor.

She is also a visiting professor of management at the University of Texas at Austin’s McCombs School of Business. Brown has spent the last two decades researching courage, vulnerability, shame, and empathy and is the author of six #1 New York Times bestsellers: Atlas of the Heart, The Gifts of Imperfection, Daring Greatly, Rising Strong, Braving the Wilderness, and Dare to Lead, which is the culmination of a seven-year study on courage and leadership.

She co-edited the best-selling anthology You Are Your Best Thing: Vulnerability, Shame, and the Black Experience with Tarana Burke. She leads the Unlocking Us and Dare to Lead podcasts, and her TEDx lecture, «The Power of Vulnerability,» is one of the top five most-viewed TED talks in the world, with over 50 million views.

Her Netflix special, The Call to Courage, is the first televised lecture by a scholar on the streaming site. Brené Brown resides in Houston, Texas, with her husband, Steve. They have two children, Ellen and Charlie.