All the Light We Cannot See Summary

All the Light We Cannot See Summary 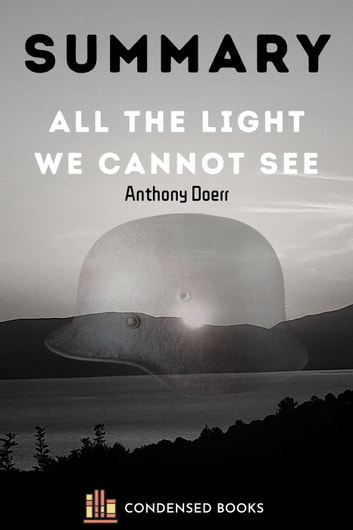 A high-quality summary of Anthony Doerr´s book All the Light We Cannot See, including chapter details and analysis of the main themes of the original book.

About the original All the Light We Cannot See book:

Anthony Doerr’s vast historical novel, All the Light We Cannot See, addresses the overall topic of lost and redeemed humanity during World War II’s last days. In addition to alternating between the lives of Marie-Laure LeBlanc and Werner Pfennig in each chapter, each section, or set of chapters, also switches between these characters’ prior lives and the Allied troops’ siege of Saint-Malo in August 1944.

All the Light We Cannot See Summary is written by Condensed Books.

All the Light We Cannot See

Marie-Laure is the adored daughter of Daniel LeBlanc, the master locksmith at the National Natural History Museum, and she grows up in Paris. Marie-Laure, who has been blind since the age of six, learns to navigate her environment with the help of her father’s compassion and perseverance. He creates a scale model of her area so that she may learn how to navigate it on her own. He also provides her with Braille books, which allow her to explore a world beyond her own.

Werner and his younger sister, Jutta, grew up in a protestant orphanage. Werner, a brilliant young man, constructs his radio, which takes up distant transmissions from places all over the world. These broadcasts give him and Jutta hopes for a brighter life, notably a scientific show for youngsters hosted by a Frenchman. Werner’s childhood has been defined by poverty and a fear of ending up in the mines like his father, so he takes advantage of a chance to escape the mines by enrolling in a Reich-sponsored school. In some respects, he achieves the education of his dreams, but the price he pays is his humanity.

Werner and Marie-Laure both encounter significant challenges as they grow up: Werner faces poverty without the assistance of his parents; Marie-Laure faces the death of her mother at birth and must learn to cope with her blindness. Their difficult pasts, on the other hand, highlight their strengths: Werner’s brains and inventiveness, and Marie-imagination Laure’s love of nature.

The novel’s several sections culminate at a point when they meet, forming a prolonged climax. Werner falls in love with Marie-Laure when he sees her walking down the street in Saint-Malo, even though the novel is not a classic love story. Werner saves Marie-life Laure’s and assists her in escaping the city, which is still under assault, so redeeming himself despite a duty to the Reich.

The tale continues after the war ends, outlining the ramifications of Werner’s humanitarian deed and exposing Marie-survival. Laure The reader may also witness Werner’s brilliant curiosity, which is no longer veiled by poverty or history, via Jutta’s kid, Max.

The reader is left with a feeling of the strength of light over darkness and the human spirit’s determination to preserve its own, known in the most desperate of circumstances, in the after.